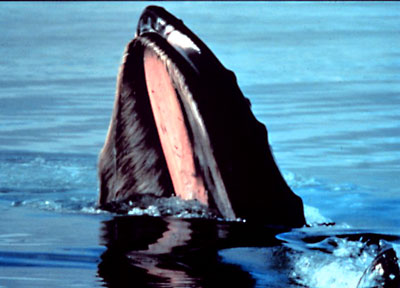 Echolocation is mainly found in toothed whales, such as dolphins and sperm whales, not their toothless cousins. The toothless-whale group -- which includes humpback whales, blue whales and many other species -- possess a unique feeding adaptation called a baleen. The baleen is a wide plate in the whale's mouth, made up of hundreds of long, fringed blades, composed of keratin -- the same material in our fingernails. These blades form a sieve that the whale uses to filter small animals -- such as krill, plankton and small fish -- out of seawater. Because of this unique attribute, toothless whales are usually referred to as baleen whales.

There are two groups of baleen whales, distinguished by the way they use theses sieves. Skimmers open their mouths and swim forward, catching fish, crustaceans and plankton as they go. After they've filtered a good bit of water, they knock any morsels loose and swallow them whole. Gulpers take in a mouthful of water and then push the tongue forward to force it all out through their baleen, catching any prey on the inside of the plate. Despite their large size, baleen whales typically have very small throats, measuring only a few inches across. This is all they need to devour the krill and other small creatures that make up their diet.

Since baleen whales filter water for their food, instead of ripping into their prey with sharp teeth, many people get the impression that they are passive hunters, simply cruising through the sea with their mouths open, snagging whatever happens to be in the way. But in fact, most baleen whales will seek out areas with high concentrations of food, and they may employ a number of tactics to catch their prey. Humpback whales, for example, trap fish with a sort of bubble net. When it has located a school of fish near the ocean's surface, a humpback swims in a circle underneath them, releasing air out of its blowhole. This builds up columns of bubbles all around the school, so they are contained in one small area. Then the whale charges up from below, catching the fish in its baleen. Humpback whales may also emit a loud shriek as they approach the fish, apparently in an effort to disorient their prey.

Humpback whales and other whale species can produce a wide range of sounds, which they use to communicate with each other over long distances. In the next section, we'll explore the noises whales make and find out what this might say about whale intelligence.