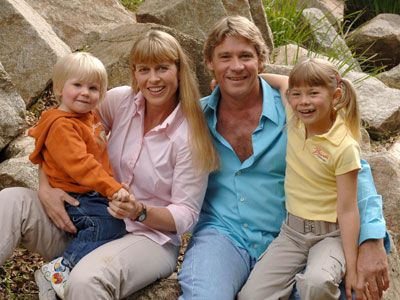 Steve Irwin, "The Crocodile Hunter" with his family in April 2006.
Australia Zoo via Getty Images

­Monday, Sept. 4, 2006, was a dark day for humans and Dasyatidae alike. On that day, along the Great Barrier Reef off the coast of Queensland, Australia, Steve "The Crocodile Hunter" Irwin was killed while filming a documentary. While swimming over a large stingray (of the Dasyatidae family), the naturalist and television host di­ed when the cartilaginous fish's barbed tail flicked upward and stabbed Irwin multiple times in the chest. A barb from the tail broke off the fish and lodged in the man's heart.

Before Irwin's accident, only two other people were known to have died from a stingray sting off the coast of Australia [source: Peatling]. What makes Irwin's death all the more tragic is that, despite their fierce and primeval appearance, stingrays are generally docile creatures. In fact, they're often called the "pussyc­ats of the sea" [source: Williamson]].

­Dasyatidae encompasses about 70 species of stingrays, varying in size from just less than one foot to up to 6.5 feet (30 centimeters to 2 meters) in diameter [source: McEachran and Carvahlo]. Stingrays are usually found in relatively shallow coastal saltwater regions, although some types are found in freshwater lakes and rivers in South A­merica. The fish eat mollusks, shellfish and bivalves by using the strong grinding plates in their mouths to crush the shells of their prey. Stingrays only use their formidable stingers to defend themselves; they don't use them to capture prey. Members of the Dasyatidae family are typically gentle creatures, but Steve Irwin's improbable death showed that their stingers can inflict serious damage.

It's common knowledge that another potentially dangerous aquatic life-form, the jellyfish (family Cyaneidae), can still pose a threat through contact with nematocysts (stingers) found on its tentacles, even after the jellyfish is dead. These nematocysts bear toxins produced by the jellyfish, which it uses for defense and to capture prey. A lifeless jellyfish washed ashore on a beach can still inflict pain on a person unlucky enough to step on it. Stingrays also produce toxins delivered through barbs on their stingers. This raises the question: Is a stingray's sting still lethal even after its death?