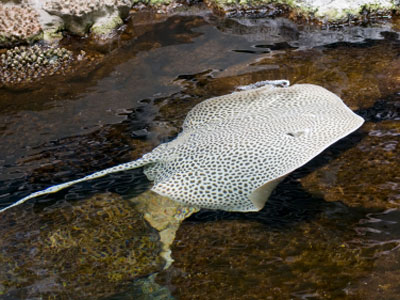 Rays like this honeycomb stingray tend to live where humans vacation.
Nancy Nehring/iStockphoto

­To find out if a dead stingray can still kill with its stinger, we first need to explore how a stingray us­es its tail to defend itself.

Aside from its large, flat, winglike body, its mouth, eyes and gill slits on its dorsal surface and its tail, a stingray is generally featureless. This serves the stingray well; it lies flat on the sandy bottom of its habitat and camouflages itself by blending in with the sea bottom. Since stingrays often dwell just offshore, humans frolicking on the beach can easily and inadvertently step on a hidden one.

When stingrays are stepped on, handled roughly, or spooked, their tails will whip forward toward their heads like a scorpion, or to the side. Toward the end of a stingray's tail (called its caudal appendage) lies its venom apparatus. Long spines -- measuring several inches long and typically thought of as what puts the "sting" in "stingray" -- lay within a grooved abscess in the tail known as the cuneiform area. These spines are essentially hidden from sight when the stingray is unthreatened. A stingray is always preparing for action, however; tiny barbs are housed within the spine. While these barbs are idling beneath the spine's surface inside the integumentary sheath, they're constantly being washed in the stingray's venom.

When threatened, the stingray begins its tail whip; the barbs on the spines tear through the thin tissue of the integumentary sheath, and the spines jut out at an angle that's nearly perpendicular to the tail. Once the stingray is in motion, its tail becomes a whiplike weapon with a poisonous nail sticking out of it. The stingray's spines are rigid -- and in some species, can actually pierce bone [source: Lovgren]. On the other hand, they're also brittle and can break off and lodge into any laceration they create. The venom, contained in the mucuslike coating over the barb, is introduced into the body through the wound (a process called envenomation).

It doesn't sound like a very pleasant experience, and it's not. It's usually not life-threatening, but it is painful. Still, it's possible to die from a wound inflicted by a live stingray, but what about a dead one?