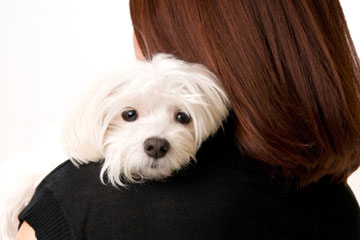 The Maltese is a snuggler.
iStockphoto/Thinkstock

Just because a breed of dog is categorized as "toy" doesn't mean it wants to be treated like a toy by your rambunctious 3-year-old. That's why, if you're in the market for a toy breed and you have children, it's a good idea to research the temperament of these lightweight pooches. Which breed of dog will remain patient while little Isabella dresses it in her baby doll's clothes? If Aiden wraps his arms around this breed of dog, will it lick him or will it nip him? Or worse -- because it's so small -- will it break?

Generally, the Maltese is described as fearless, vigorous and a little tougher than it looks. It stands just between 5 and 8 inches (12.7 and 20.3 centimeters) tall and weighs between 4 and 7 pounds (1.8 and 3.1 kilograms) [source: Palika]. Maltese are very social and playful. A true-to-the-breed Maltese will bask in being the center of attention, and as an added plus, this type of dog loves to be snuggled and held. Like many tiny dogs, the Maltese is notoriously difficult to housetrain, and it's a companion dog, meaning it prefers to be with its owner rather than left alone for long periods. The Maltese requires a grooming regimen; its long white locks should be brushed daily, or else they'll become matted. It doesn't need tons of vigorous exercise -- a daily walk and some playtime will suffice [source: Palika].

When making a decision about whether a Maltese will make a good member of your family, you should first consider the age of your children and their levels of rambunctiousness. Often, breeders simply won't sell a Maltese puppy to a family with small children because the puppies are so tiny and fragile that a small child who plays too rough could accidentally harm the animal [source: Palika]. On the other hand, while the Maltese may be physically delicate, it possesses a patient temperament [source: Yamazaki]. Because of this gentleness (it's considered the gentlest of the smallest dogs), along with its playful nature and its fluffy-white-lapdog persona, it's often described as a good family dog and a good companion for children, particularly older children who know how to handle it carefully [source: Marthastewart.com].

Another of the Maltese's family-friendly traits is that it's typically safe for allergy sufferers. Although many people assume they're allergic to dog hair or fur, it's often the dander produced by the dog that's the problem. Dander is sort of like dandruff -- dry skin that flakes off, becomes airborne, and is an allergen. No dog is completely allergen-free (or hypollergenic), but some breeds definitely cause less sneezing and watery eyes for those who suffer from allergies. The Maltese produces a smaller amount of dander than most other breeds of dogs, which means fewer allergens in the air. To reduce the amount of dander further, brush the Maltese's long white mane on a daily basis.

For more on dogs breeds and other perplexing pet questions, visit the links on the next page.