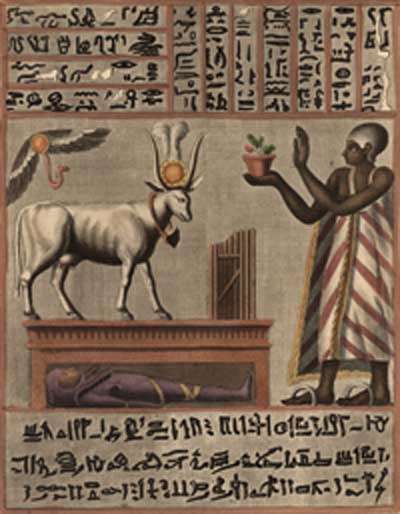 Hieroglyphics and images of ritualistic animals adorn an Egyptian manuscript found with the swathing of a mummy.
Hulton Archive/Stringer/Getty Images

Some of our earliest evidence of man (and art) is tied to animals. Cave illustrations depict bison and deer. Obviously, animals have played a large part in the lives of humans throughout our history, becoming integral to our survival, our history and our very identity. It seems natural that we would want to incorporate and include animals in our lives as much as possible for food, companionship, clothing, milk and a slew of other things.

From archeological evidence such as fossils, historians have learned a lot about man's domestication of animals. Animal domestication is partly tied to human domestication, or the human shift from hunter-gatherer to farmer. Though hunter-gatherers worked with domesticated dogs long before human domestication, later on, farmers saw the benefit of keeping livestock. As some people became farmers and started to settle in one place, raising domesticated livestock offered them the convenience of fresh meat as well as manure for fertilizing crops. Diamond points out that the civilizations that domesticated animals (and plants) consequently wielded more power and were able to spread their cultures and languages [source: Diamond].

Civilizations all over the ancient world domesticated animals for various reasons, depending on which animals were around them and what the animals could provide humans. Certain animals even took on religious significance in many civilizations, such as Ancient Egypt and Rome. Here is a breakdown of where animals were originally domesticated:

From what experts have learned about the progress of animal domestication, as a species becomes more domesticated, it changes. For example, domesticated animals' brains may become smaller and their sensory abilities less precise [source: Diamond]. Presumably, these changes occur because the animal doesn't need the same level of intelligence and sharp senses of sight and hearing for survival in a domesticated home. Other common changes include floppy ears, curly hair and especially changes in size and mating habits. Domesticated animals are more likely to mate year-round, rather than seasonally, as they do in the wild [source: Encyclopedia Britannica]. These changes and others often cause domesticated animals to look drastically different from their wild ancestors.

Humans themselves have changed significantly as a result of animal domestication. For example, milk has changed our digestive system. Before animal domestication, people naturally developed lactose intolerance as they grew into adulthood (and no longer needed a mother's breast milk). That is not always the case anymore. When humans started raising livestock, they started drinking more milk, and this has adapted our digestive systems to accommodate milk throughout our lives.

Next, we'll learn how the legendary evolution of the dog may have produced man's earliest and most faithful animal companion.