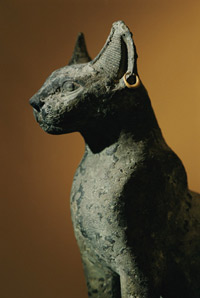 An Egyptian statue of a cat. The statue was uncovered from the ruins of Bubastis.
Kenneth Garrett/National Geographic Collection/Getty Images

In sharp contrast to dogs, cats did not evolve to look or act very different from their wild ancestors. This fact has made it difficult for scientists to determine when exactly cats domesticated. Although evidence shows that cats probably did not evolve from modern large cats, such as lions and tigers, Archaeologists cannot use the shapes of old bones and scientists cannot investigate DNA to distinguish between ancient small wild cats and modern domesticated cats. However, some evidence does lead scientists to believe that the modern domestic cat (Felus catus) may have descended from a European wild cat (Felis silvestris) and an African wild cat (Felis lybica), cats that still exist in the wild.

Other clues provide some convincing evidence about early feline domestication. For example, excavation of a 9,500-year-old gravesite revealed the remains of a human buried alongside a cat. From this evidence, historians believe that most likely by this time humans got personally attached to their feline friends. The proximity of the human and cat indicates that the burial was intentional and that cats held a significant role in that culture.

Even if guessing when cats became domesticated is difficult, why humans took them in is a little easier to speculate. Every kid who's seen a "Tom & Jerry" cartoon is familiar with cats' infamous dislike of mice. Usually cats are more successful at capturing, or at least scaring, their rodent prey than Tom ever was. It's exactly this skill that probably made cats so appealing to humans. Trading pest-control for food and shelter, cats eventually overcame their aversion to domestication.

Cats probably did not take to domestication as easily as wolves/dogs did because cats have no social hierarchy that allows humans to take the alpha role. Wolves travel in packs, following a highest-ranking wolf, but a cat is a solitary and proud animal who takes orders from no one. Although the domestic cat is its own species, its independence and the fact that domestication didn't cause any drastic changes allowed feral cats to survive on their own fairly well even if raised in the luxury of a human home. So, although they are not known for taking orders from humans, perhaps cats stick around because they enjoy receiving food and shelter from their human masters (or servants, depending on who you ask).

Although it was nice to have hunting and pest control partners, humans needed to rely on more than just dogs and cats to advance their civilization. Next, we'll find out how other domesticated animals helped humans progress into transportation and farming.

Nine Afterlives of the Cat

Like dogs, cats were very important to Ancient Egyptians. Egyptians gave cats a god-like status by 1700 B.C. and depicted them in statues and wall drawings [source: Bard]. Egyptians also mummified cats often. Inspections of these cat mummies reveal that Egyptians probably put just as much care and reverence into this mummification practice as they did for humans [source: Owen].