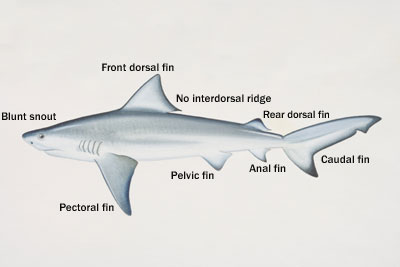 The anatomy of a bull shark
Dorling Kindersley/Getty Images

Bull sharks got their name for a reason. For one, their body is shorter and more stout than that of their famous cousin, the great white. They also have a blunt, rounded nose that's wider than it is long, giving them a bullish appearance. The name might also come from their aggressive demeanor.

You can tell bulls apart from other species of shark by their lack of an interdorsal ridge. You know the large fin on a shark's back that sticks out of the water and scares the daylights out of ocean swimmers? That's called the dorsal fin. The bull shark has a second dorsal fin farther back and much smaller than the first. The area between the two dorsal fins can either be flat, or have a small, raised ridge of skin -- this is the interdorsal ridge. The fins of a young bull shark typically have dark tips, but they grow out of this awkward stage in adulthood.

Bulls are dark to light gray with a white underbelly and have smaller eyes than many of their shark cousins. Their small eyes indicate that they have limited vision, which could account for the fact that they like to swim in murky waters near the shoreline where eyesight isn't as important and prey is abundant. Their jaw is stuffed with hundreds of wide, triangular teeth that are about 1.5 inches long, heavily serrated and perfect for tearing apart the flesh of their prey.

Aside from being wider than great whites and having a rounder nose, bulls are also shorter. A large great white can grow up to 20 feet (6 m) long, but a full-grown adult bull shark is usually no more than 11 feet (3.3 m) long, topping the scales at about 500 pounds (226 kg). This is the largest they'll ever get, though. A typical female, which grows larger than the male, is about 7.8 feet (2.3 m) and weighs around 285 pounds (129 kg). The male only grows to about 7.3 feet (2.2 m) and weighs a paltry 210 pounds (95 kg) on average. Why are the females larger? Simply because they live about four years longer and continue to grow throughout their lifespan.

The reproductive habits of bull sharks aren't as different from humans as you might think. Females grow their young in the womb like us, instead of depositing massive amounts of eggs outside of their body like many fish do. However, they're pregnant for about a month or two longer than humans, and can carry anywhere between one and 13 baby sharks, or pups, at a time. Females can't give birth until the ripe old age of 10 years old, which would be about 50 years old in human terms based on an 80-year lifespan. Mating generally happens in the summer, and their free-swimming pups are born the following April to June. The pups are only a couple of feet long at birth, and their chances of surviving the dangerous ocean waters are slim. For this reason, the expectant mother often travels to the safer freshwaters to give birth and nurse her pups.

But how can these sharks survive in freshwater? Swim on over to the next page to find out.