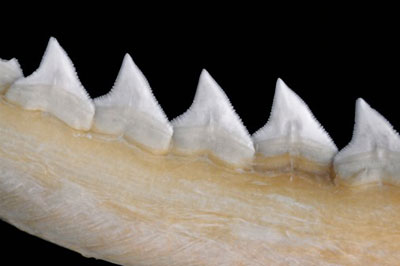 The fine serrations on bull sharks' teeth make them ideal for eating you.
Norbert Wu/Getty Images

If we're going to talk about the bull shark's diet, we need to break it up into the freshwater menu and the saltwater menu. When ocean-bound, bulls eat bony fish, stingrays, dolphins, sea turtles, other sharks, mollusks, crustaceans and all kinds of other schooling fish. They hunt alone, instead of in groups, and although they appear slow as they troll the ocean floor, they're known for their agility and quick bursts of speed -- up to 11 miles per hour. This may not sound too quick, but when you see a 10-foot shark coming your way at that speed, you may rethink your definition of fast. They're also not afraid to pick on someone their own size or even larger, something most other sharks won't do.

When the bulls hit freshwater, their diet gets a little more interesting. They feast on tarpon fish, crabs, shrimp, squid, sea urchins, turtles and sawfishes. Not interesting? How about birds, sloths, dogs, rats, cows and antelope? There have been reports in Australia of river-dwelling bulls eating horses, and in Mozambique, they feed on hippos. It's not exactly what you'd expect to find on a shark's menu, but bull sharks are opportunists -- they even eat their own kind if necessary.

The bull's hunting technique is known as the "bump and bite." This means that they will typically head-butt their prey before sinking their teeth into it. The bump is an investigative technique used to help the nearly blind shark figure out what it's about to bite. If you're scuba diving and get bumped by a bull shark, you're in trouble. Another technique the bull uses to make up for its poor vision is to hunt in murky water. Like other sharks, they're able to find their prey with their keen sense of smell. In shadowy waters, bulls can sniff out prey that can't see its approaching predator.

For more information on shark and other sea life, please see the links on the following page.