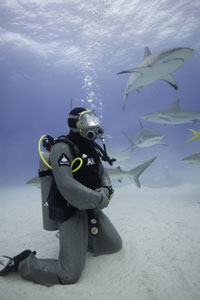 Imagine you're floating like a bobber in the ocean, waves lapping at your face. You kick your feet lackadaisically from time to time to keep your head above water. It's relaxing. Then you suddenly remember that there are sharks in the ocean. Millions of them. And there you are, like some goof, just begging to be eaten.

You try to remain calm, but you rapidly make your way back into shore. Finally, you're back on solid ground, unmolested by a shark of any variety. Being the curious type, you head straight home to research shark attacks. Surprisingly, you find there are far fewer than you expected. In 2007, there were 71 reported shark attacks, only one of them resulting in death [source: University of Florida].

It seems like a low number, considering how scared humans are of sharks. Seventy percent of respondents in a 2003 poll said they felt sharks are dangerous [source: CNN]. And there's even a term for excessive fear of sharks: galeophobia [source: Medical Dictionary]. But as negative an image we have of sharks, they're simply not that interested in eating us. Because we live in different habitats, sharks haven't had the opportunity to develop a taste for humans. And although we're becoming an increasingly obese species, we're nothing compared to blubbery seals, one of predatory sharks' favorite foods.

Another species that may share your house could be another story. Would your dog serve as an appetizing snack for a shark? Shark attacks on dogs have certainly been reported. One woman lost her Pomeranian -- Rex -- after he went swimming in the Bremer River in Australia in January 2008. The woman believes Rex was attacked by one of the bull sharks known to swim into the river [source: Queensland Times]. The idea that sharks eat dogs was further spread by the British tabloid The Sun in 2005. The paper reported that dogs were being used as live bait in the French territory of Reunion Island in the Indian Ocean [source: The Sun].

So have the fishermen of Reunion Island happened on a grisly new type of bait for shark fishing? Are dogs a shark's favorite meal? Find out on the next page. 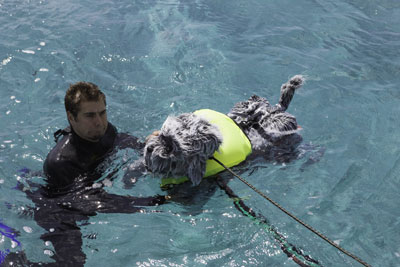