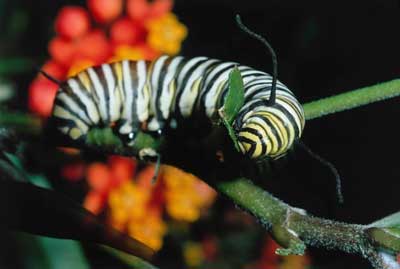 Butterflies reproduce the way other animals do -- sperm from a male fertilizes eggs from a female. Males and females of the same species recognize one another by the size, color, shape and vein structure of the wings, all of which are species specific. Butterflies also recognize each other through pheromones, or scents. During mating, males use clasping organs on their abdomens to grasp females.

Many male butterflies deliver more than just sperm to their mates. Most provide a spermatophore, a package of sperm and nutrients the female needs to produce and lay eggs. Some males collect specific nutrients to produce a better spermatophore in an attempt to attract a mate. Some females, however, don't have a choice -- in some species, males mate with females before they have left their chrysalis or swarm the chrysalis waiting for the female to appear. In most species, males and females look a lot a like, but females often have larger abdomens for carrying their eggs.

In this composite image, a monarch butterfly emerges from its chrysalis and expands and dries its wings.
© Cathy Keifer/iStockphoto

Females store the sperm in a sac called a bursa until she's ready to lay her eggs. She fertilizes her eggs as she lays them, using the last sperm she received first. For this reason, males of some species will leave a substance that dries into a film on the female's abdomen in an effort to keep her from mating with other males. Females lay their eggs one at a time or in batches of hundreds depending on their species.

A butterfly has to take special care when laying eggs. The eggs must be kept warm and at the right humidity level. Too much moisture and the egg will rot or be attacked by fungus. Too little and the egg will dry out. Caterpillars also need to start eating as soon as they hatch, so most of the time the female places the eggs directly onto a type of plant that the caterpillar will eat. Typically, the eggs attach to the underside of a leaf, so they are hidden from predators. A few butterfly species use predators' nests, such as anthills, as protection, disguising their eggs with the pheromones the predators use to recognize each other.

In spite of all the effort female butterflies make to protect their eggs, very few make it to adulthood. Ants, birds and other animals can eat the eggs themselves, and caterpillars and butterflies are a popular snack for everything from birds to bats. Some insects also lurk in or around flowers to prey on adult butterflies. A butterfly's chrysalis also has few defenses from predators. And, at all stages of life, a butterfly can succumb to fungi and diseases.

But natural predators aren't the only threats to butterflies' survival. Next, well look at some of the other dangers butterflies face.