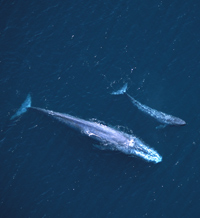 Baleen whales spend hours each day filter feeding, but they also spend a lot of time migrating. Before they migrate, though, they have to store up enough food to make the trip. The krill, schooling fish and plankton that make up a baleen whale's diet are abundant in colder waters in the summer, but they disappear in the winter. Baleen whales eat a lot in the summer to prepare for the trip and compensate for a lack of prey in the winter [source: Heyning].

They migrate to warmer waters for the winter, where it takes less energy, and thus less food, to live. Baleen whales make some of the longest migratory trips of any mammal, with the humpback whale edging out the gray whale for the record. The gray whale travels 5,000 miles (8,047 kilometers) from the Bering Sea to Baja California, Mexico, in about five months [source: Ellis]. The humpback whale has been tracked from the Antarctic Peninsula to Columbia, a voyage of 5,176 miles (8,330 kilometers) [source: Carwardine et al.].

Without the pressures of feeding, baleen whales turn their attention to another matter: calving. Breeding and birthing takes place in the warmer waters, and baleen whale calves remain in the area with their mothers for a while, gaining strength and size for the colder waters.

Breeding appears to be very competitive, with several males fighting for the right to mate with a female. Sometimes, the female will mate with the most aggressive male, or she may just mate with all of them. Males have been observed taking turns and helping each other mate with the female. Females, though, usually don't mate against their will and likely mate many times to ensure success.

The gestation period for baleen whales ranges from 10 months to 14 months. If you thought pregnant women ate a lot, just wait until you hear about baleen whales. In the last half of the gestation period, females increase their food intake by 50 percent to 60 percent, which they'll store to be able to feed their calves [source: SeaWorld]. For this reason, a newly pregnant female will leave for colder waters soon after mating to start bulking up, and she'll return to the warm waters to give birth.

Observation of a whale birth is rare, but females typically give birth to one calf. At birth, the calf can swim, but not far, and is about one-quarter of the mother's length and 3 percent to 4 percent of the mother's weight [source: SeaWorld]. Males may help protect calves that could possibly be theirs, but a very close bond exists between the female and her calf. The females feed the calves frequently with milk that is about 40 percent fat for up to a year [source: Carwardine et al.]. This nursing period helps the calf get big fast, so that it can migrate and feed in colder waters as well. Blue whale calves gain about 200 pounds (90 kilograms) each day that they nurse.

While the whale calves get larger, the adult males are possibly on one of the best weight-loss programs ever. Since they don't feed during migration or breeding, they lose a lot of weight. The gray whale can lose up to about 25 percent of its body weight in the winter [source: Heyning].

Does the baleen whale calf face any predators once it makes its way into the world? Find out on the next page. 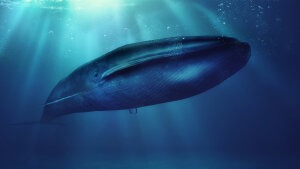