Manatee Vision: Relying on Other Senses 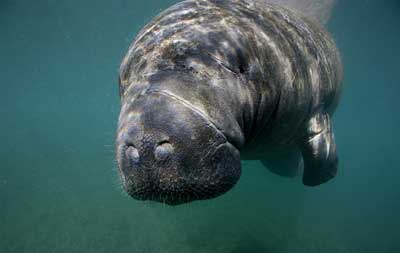 If you lived in a dimly lit cave, how important would vision be to your daily life? It would help you decipher general shapes and prevent you from colliding into things, but Technicolor splendor wouldn't be necessary.

A manatee's underwater habitat may not be much brighter than that cave. Nevertheless, their eyeballs contain rod and cone cells, like our eyes. Rods allow you to see in low light, and cones differentiate colors and details. Studies of manatee vision have concluded that they can discern blue and green light pigments, but few others [source: Newman and Robinson]. For instance, a color experiment testing to see if four manatees could distinguish blues, greens and reds from shades of gray showed that they could process blue and green, but they couldn't perceive red and blue-green combinations [source: Griebel and Schmid]. When only two pigments are involved in color vision, it's called dichromatic vision.

The overall consensus is that manatees have poor sight, tending toward nearsightedness [source: Mote Marine Laboratory]. One experiment at the Mote Marine Laboratory in Florida tested two captive manatees' vision by using squares of material covered in vertical pinstripes. The control square had very thin stripes, and the other square had noticeably wider stripes. The researchers suspended the two squares 3 feet (1 meter) away from the manatees and trained them to swim toward the target with the wider stripes.

Leaving the control square unchanged, they altered the pinstripes on the second target square to become gradually thinner, making it harder to discriminate between the two stripe patterns. The researchers tested how thin they could make the stripes on the second square before the manatees failed the test. You can compare this to the vision tests your optometrist gives you during your annual eye exam. When you look into the optical refractor at two separate objects, the doctor changes each view, making it sharper or blurrier until you can't decipher between the two, in order to gauge your vision level. The more successful of the two manatees in the experiment scored at a level falling somewhere between the vision of a frog and cow, and both sea cows would be classified as legally blind [source: Mote Marine Laboratory].

The manatee's limited vision doesn't hinder it from fulfilling basic necessities [source: Goode]. Keen vision isn't required to spot food, just enough to find its way toward algae or other aquatic plant life. And since manatees have no natural predators, they don't need to be on the lookout.

As a result, manatees don't rely heavily on vision to navigate through the murky water. Researchers have discovered that their sense of touch probably plays the role of navigator. Manatees are covered in whiskerlike hairs called vibrissae. These hairs are rooted in blood-filled follicles that trigger nerve impulses when moved [source: Wong]. The follicles connect to around 50 nerves, which signal the brain of increased pressure from any surrounding motion [source: Eliot]. You can think of this as a mammalian form of a fish's lateral line system that converts the mechanical energy of water movement to electrical energy through nerve impulses.

Manatees also hear far better than humans. They do best at higher frequencies, communicating with each other through calls and whistles. Scientists are investigating how well manatees can detect low-frequency sounds and if they use their vibrissae to do so. With adaptations like these, manatees naturally compensate for their lackluster vision.

And perhaps in a manatee's eyes, the mermaid mix-up isn't too far off the mark. From a few feet away, everything probably resembles a blurry blob.