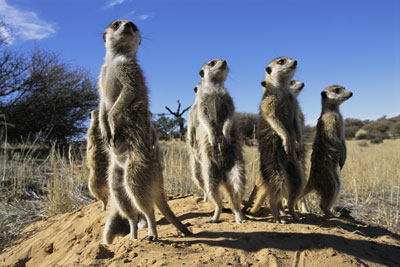 Biologists haven't cracked the code of meerkat language to the degree where they understand subtle differences like which meerkats say po-TA-to and which prefer po-TAH-to. But meerkats specialists have gotten a respectable handle on the basics of meerkat communication. And some nuances actually have been uncovered.

As far as sounds go, meerkats have a wide vocabulary [source: Animal Planet]. Meerkats purr to show contentment and attachment. They chatter when they're nervous, and they squeal when danger presents itself. Meerkats also use sounds to coordinate their hunting efforts. When the dominant female and male wake up and decide it's time to forage for food, one or both will emit a call for the rest of the gang to follow them [source: Roberts].

Meerkats are very territorial and tend to clash when two gangs meet. Most of the time, these meetings (which biologists call intergroup interactions) are usually just shows of force more than actual violence. But for one gang to enter another's territory, a boundary has to be crossed. This is where scent communication comes in. Meerkats demarcate the boundaries of their claimed area by emitting a scent. This scent is generated in the anal glands and is mixed with urine. It may sound a bit off-putting, but meerkats are hardly the only mammals to mark their territory in such a manner. Your dog or cat at home does much the same thing.

With all of the danger posed by their desert environment, meerkats always have sentinels -- lookouts or guards -- scanning for danger whenever the group is active. Whether pups are playing in the open or the gang is following the dominant male and female foraging for food, there's always at least one meerkat watching out for danger. When a sentinel spots a jackal approaching, it will utter a cry of alarm to warn the rest of the gang. But this call will be different than the warning yelp given for an eagle seen circling off in the distance. That's because meerkats have different types of sounds to distinguish where the threat is coming from -- land or air [source: Roberts].

The alarm system of sound communication among meerkats is even more intricate than this. A meerkat sentinel who sees an imminent threat -- say that eagle's gotten a lot closer -- will emit an urgent squeal. A far-off snake, which meerkats can generally chase away by mobbing it (forming an intimidating throng around it), may only elicit a nervous chatter from the sentinel. Essentially, the alert system signals to the others what the sentinel sees.

Body language also plays a major role in a dangerous situation. When a meerkat sentinel issues a warning, he or she stares directly at the threat. By watching the direction of the sentinel's gaze, the meerkat gang can tell which direction the treat is coming from. If the danger is near, the sentinel will dash into a bolt-hole, a hiding place that meerkats dig. The rest of the mob will take a cue from the sentinel and run for cover, too.

As for what meerkats chat about when they've taken cover together in a bolt-hole and a jackal's nose enters, we may never know.

For more information on meerkats, visit the next page.

Check out more about meerkats from Discovery Channel's Animal Planet.