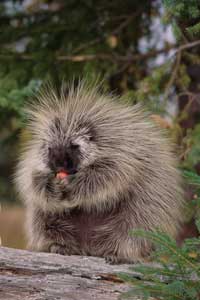 Those 30,000 quills might get in the way if you want to pet a porcupine. See more pictures of mammals.
Gail Shumway/Getty Images

If you're walking through the forest and you hear a rattling sound nearby, step lightly. You may be in the presence of a threatened porcupine. In the same way that rattlesnakes in the desert shake their tails before striking, porcupines may display and rustle their quills to warn a potential predator to back off. If the threat continues to advance, it may end up with a face full of these barbed hairs. And these small animals don't need to aim perfectly in order to poke predators as they're protected with 30,000 quills on average, covering their entire bodies except their faces, inner limbs and bellies.

Ranging across North America, except for the Southeastern and Great Plains states, porcupines generally live in forests full of cone-bearing trees. They're the only mammals in North America with quills [source: Feldhamer et al]. These rodents don't use their spiky tresses for hunting since they're herbivores, eating mostly inner tree bark and foliage. Instead, these quills serve mostly defensive purposes, protecting porcupines from predators and allowing them to put up a decent fight if challenged.

In addition to being used as actual weaponry, porcupine quills serve as part of the animal's elaborate warning system. They're marked with white pigmentation that contrasts with the porcupine's darker fur, making them more visible to any potentially threatening animals at night, when porcupines are most active [source: Feldhamer et al]. Also, these barbed hairs deliver an olfactory message when the rodent becomes perturbed. The porcupine's sebaceous glands produce an odor which is secreted into a patch of skin called the rosette, located on its lower back [source: Roze]. When angry, the quills atop the rosette emit a pungent hormonal odor. Other animals like deer have special hairs, referred to as osmetrichia, that perform similar scent-spreading tasks [source: ­Roze].

In addition to short, thick underfur, longer guard hairs and motion-sensitive vibrissae, or whiskers, porcupines have thousands of quills that lay flat when the animal is relaxed and stand on end when it feels threatened. Quills vary in size from half an inch to 4 inches (1.2 to 10 centimeters) long. Despite their appearance, quills are really specialized hairs. A quill consists of a follicle that attaches to the skin, a shaft with a spongy interior and the notorious barbed tip. If you look closely at the tip, you'll see multiple layers of barbs that cause the quill to embed deeper into a victim's skin after penetration.

But sometimes, porcupines can fall prey to their own defensive tricks.