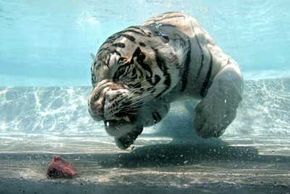 In Norse mythology, Odin is the god of all the gods. However, he looks more like a cyclops from Greek legend, since he has only one eye -- he traded the other eye for a drink from the Well of Wisdom.

Another Odin, a white Siberian tiger who lives at Six Flags Discovery Kingdom near San Francisco, wouldn't just take a drink from the Well of Wisdom like the Norse god -- he'd dive right in. But Odin couldn't care less about gaining smarts; he just enjoys the water. The white tiger entertains crowds with his swimming capabilities. With eyes wide open and ears pulled back, the big cat freely jumps into a pool of water and dives to the bottom.

Anyone who's ever tried to bathe a cat knows that these pets generally aren't fans of water. Even a few drops flicked their way will send cats scurrying in the other direction. There are exceptions to that rule, however. An extraordinary cat named Hawkeye has his own custom-made scuba diving gear that his owner designed and had made for a pretty penny. And it doesn't take coercing to get Hawkeye in the water; he'll hop into his owner's swimming pool of his own accord. Read more about Hawkeye's underwater adventures in How could a cat scuba dive?

Like Hawkeye, Odin doesn't mind the water either, although he has some added incentive for getting wet. His trainer tosses meat into the pool, which the white tiger eagerly dives in after by holding his breath to retrieve the tasty morsel. But it wasn't the trainer that initially gave Odin his water wings. Instead, Odin picked up the behavior from another tiger at the animal park.

Odin's swimming wouldn't come as a surprise to any knowledgeable tiger expert. Of all the big cat species, tigers in particular are known for their swimming capabilities. When most tigers swim, they don't spend much time fully submerged like the white Bengal, but taking a dip wouldn't be out of the ordinary since swimming serves a few key purposes. 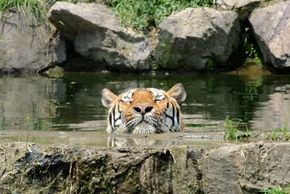 Tigers beat the heat by taking a swim.
ChinaFotoPress/Getty Images

To understand why certain tigers swim, let's first learn about where they live. The tiger species is critically endangered with a global population hovering at about 4,000 [source: World Wildlife Fund]. Of those, six subspecies still exist: Amur, Siberian, Bengal, Indochinese, South China and Sumatran. In the wild, those subspecies are dotted around the Eastern Hemisphere, largely concentrated in Southeast Asia in tropical evergreen forests. If we were to rate the heat of that area's climate on a pepper scale, it would probably reach the Thai chili level, just below the scalding habanero. For instance, summer temperatures in south India regularly top 100 degrees Fahrenheit (37.7 degrees Celsius).

When the mercury rises outside, where do humans flock? The pool. Same thing goes for tigers in steamy climates. The primary reason tigers swim is to cool off [source: Robey]. Since tigers hunt at night, they may spend a majority of their day lounging in the water, like summer guests at a Miami resort [source: Sunquist and Sunquist]. As the largest species in the big cat family, tigers have more surface area that heats up, which is probably why they swim for pleasure. Likewise, smaller cats such as the domesticated ones living in our homes might refrain from getting their fur wet since it would make them uncomfortably cold.

Odin's habit of diving to the bottom of his pool, eyes wide open, is an oddity for his species. Swimming tigers will usually submerge their bodies but not go completely underwater. The big cats generally dislike getting water in their eyes, so they often wade up to their necks [source: Animal Planet]. Like those human swimmers who take precious care not to ruin their 'do in the pool, tigers may shield their eyes by entering a body of water backwards [source: Animal Planet].

Strong bodies and webbed paws also make tigers quite capable swimmers. They have been recorded to cross rivers as wide as 18 miles (29 kilometers) and go for 9-mile (15-kilometer) stretches in open water [source: Seidensticker et al]. Aside from swimming as a mode of transportation, tigers swim as a hunting advantage. They may chase prey into the water in order to trap it.

But tigers aren't the only big cats that regularly swim. Other warm climate species, including jaguars and lions, will relax in water and swim when necessary. African lions in Botswana's Okavango Delta swim to dry land when seasonal flooding wipes out their regular range [source: Robey]. Panthers in the Florida Everglades practice similar flood-related migration as well.

Although Fido still has domestic felines beat in the swimming department, tigers and other big cats may offer a reason to reconsider the term "doggy paddle." 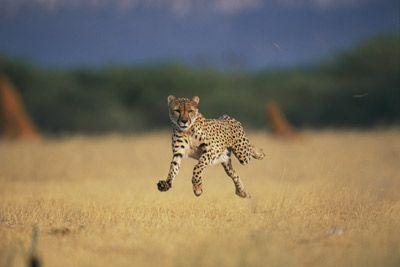 Up Next
What makes a cheetah run so fast?
Explore More 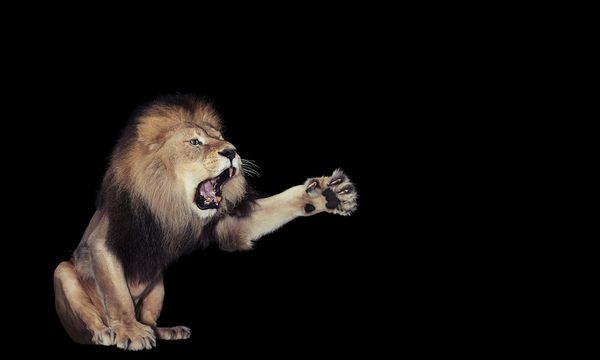 You May Like
Is there such a thing as a man-eating lion?
Explore More