The Jockey Clubs: Rules of the Thoroughbred 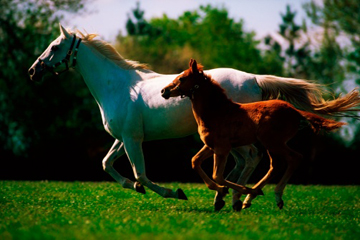 Under stud book guidelines, a foal's color not matching either of its parents may lead to genetic blood testing to determine if it can be registered as a Thoroughbred.
Designpics/The Irish Image Collection/Thinkstock

The original Jockey Club has been in charge of regulating the breed in the United Kingdom (and, by extension, all over the world) since 1750. The American Jockey Club has controlled Thoroughbreds in North America since 1894. There has also been a trend toward globalizing the standards for the breed since 1976, when a committee of nations representing six regions of the world met to form the International Federation of Horseracing Authorities, which administers the International Stud Book [source: Jockey Club]. While national Jockey Clubs and other stub book authorities maintain strict control over their own books, they also now often defer to the rules established by the International Stud Book, which has 70 member nations.

Jockey Clubs create the rules for the breed, from what colorings constitute the Thoroughbred coats, to what type of insemination is allowable, to what an owner can name his horse. The American Jockey Club recognizes nine colorings, including:

The Jockey Club also determines whether a horse's name is appropriate. There are some obvious regulations and some that aren't : A horse's name can't contain any kind of racial or social slur or offensive meaning, it can't be named after a famous person without that person's consent, it generally can't share the name with a winning or famous horse and it can't consist entirely of numbers, among other rules [source: Jockey Club].

Jockey Clubs and other stud book authorities are also responsible for tracking the international movement of horses, breeding data and, perhaps most importantly, also generally regulating Thoroughbred horse racing for its country or region.