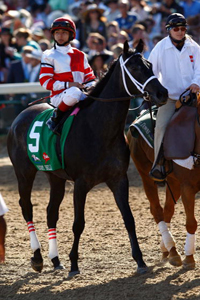 Eight Belles as she is led to the starting gate at the 2008 Kentucky Derby to start the race where she would finish second and suffer two fatal injuries that led to her euthanasia on the track.
Jamie Squire/Getty Images

In effect, the beginning of the 21st century saw the bursting of what amounts to a horse bubble. From a business perspective, an influx in investment in the 2000s led to an inflation in sale prices and stud fees. Increased potential profits led to an overproduction. Once prices normalized and dropped there was a "surplus" of Thoroughbreds, which, in turn, led to the increase in their killing. The predictable cascade of events followed the route of any market bubble, but this bubble had a pronounced effect on a breed of living animals.

The bursting of the bubble was welcomed by some. Horse prices had risen artificially high and as a result of overproduction, the quality of the horses produced declined. A decline in rampant mating means more dedication to the idea of quality over quantity among the breed.

Yet even the most purposefully applied selective breeding has produced terrible problems for the Thoroughbred breed. Because the perfect race horse is both fast and light, breeding has focused on Thoroughbreds with huge muscle concentrations but light bones. While Thoroughbreds have become faster over the years, they have also grown more fragile, producing a breed of horse with what one writer called "the heart of a locomotive [and] champagne-glass ankles" [source: Jenkins].

This has been horrifically apparent in some major races since the beginning of the 21st century. In 2006, the Kentucky Derby winner, a bay colt named Barbaro, broke three bones in his hind legs during the internationally televised Preakness Stakes held two weeks after the Derby. Following eight months of surgery, Barbaro was euthanized in 2007 [source: Associated Press]. The next year, Eight Belles, a gray filly, broke both her ankles just after finishing second in the 2008 Kentucky Derby. Her injuries were quickly deemed fatal and she was euthanized where she fell on the track at Churchill Downs [source: Associated Press].

While these two horses put a spotlight on the problems facing the Thoroughbred breed, they are two instances of a larger problem. The organization Animal Aid has documented 729 horses that were injured during races and euthanized or died in Great Britain alone from March 2007 to August 2011 [source: Horse Death Watch].