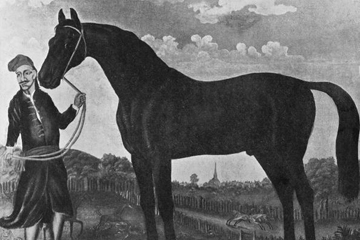 A circa 1690 painting of the foundation sire the Byerly Turk, shortly after he was captured and kept by Robert Byerley.
Hulton Archive/Getty Images

It wasn't until the three stallions that make up the foundation sires of the breed arrived in England around the beginning of the 18th century that the Thoroughbred breed was born. These horses from the Oriental group -- Arabians, Turks and Barbs that are native to the Middle East -- mated with larger English mares to form the Thoroughbred. All Thoroughbred foals can trace their bloodlines directly back to one of these three foundation sires.

Horses from the Oriental group were prized in both racing horses and war by groups around the Arabian Peninsula for at least a thousand years before the foundation sires arrived in Europe [source: International Museum of the Horse]. The English mares the foundation sires bred with in the 18th century already had some Arabian in their blood; the breed was first encountered by Europeans during the Crusades in the 11th and 13th centuries and many soldiers made the trip back to Europe with horses they'd captured in the Middle East. This history of war was maintained in the Thoroughbred breed as well; the horses were used in both world wars for cavalry.

The first foundation sire arrived in England in 1688. Captain Robert Byerley captured a Turk, a breed of horse descended from the Turcoman horse, native to the Middle East, was captured in battle in Hungary [sources: Bailey, Lundberg]. Byerley admired the horse's courage in battle and brought it back to England with him, where the stallion became known as the Byerly Turk (the second "e" was lost over time) [source: Jockey Club].

In 1704, a stolen Barb, another Oriental group breed, arrived in England. The Darley Barb (also called Darley Arabian) was a 4-year-old colt purchased by Thomas Darley, a diplomat to Syria, who had purchased the horse from a Bedouin sheik. The story goes that Darley, upon finding out the sheik reneged on the purchase and failed to deliver the horse, had the Barb stolen and smuggled out of the Middle East through Turkey [source: Lundberg].

The third foundation sire, the Godolphin Arabian from Yemen, arrived rather unappreciated in England sometime after its birth in 1724. The Godolphin Arabian was part of a quartet of Arabians given as a gift to the king of France, who released them. After serving as a cart horse in Paris, the Godolphin changed hands several times before he was purchased by the Second Earl of Godolphin around 1733 [source: Lundberg].