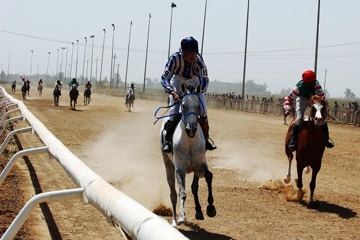 For millennia, horses were raced in match races, where two horses were pitted only against one another. After Thoroughbreds were born, race fields (the number of horses in a race) grew.
Wathiq Khuzaie/Getty Images

Back in 1770, famed Stud Book compiler James Weatherby's uncle James was hired on as secretary to the Jockey Club of England and Ireland. Thoroughbred racing had begun with match races, where two horses belonging to wealthy aristocrats were pitted against one another. Eventually, entire days were filled with these races and soon races consisted of several horses racing each other. At about the same time, the purses for these races also grew in size, reaching as much as 2000 pounds sterling, an incredible sum in those days[source: TBHeritage]. The stakes for Thoroughbred horse racing grew enormously, and James Weatherby the elder was hired to keep track of it all.

Since then, Thoroughbred racing has managed to maintain its value. In the United States alone in 2010 the gross purses for all races held that year had a combined value of more than $1 billion [source: Jockey Club]. With so much money available for winning horses, the Thoroughbred breed has become a very valuable one. A study of the Keeneland, Ky., Yearling Sale in 2006 found that the average price of a Thoroughbred yearling that year was more than $126,000 [source: Thoroughbred Review]. By contrast, at a 2007 sale of Standardbred yearlings, horses bred for the decidedly less lucrative harness racing, the average price was $40,824 [source: SBAP].

As we've seen, the Thoroughbred is born to race, and between 60 and 65 percent of all yearlings foaled in a given year will be trained to race; only about 5 percent of these will win any substantial purse [source: Allin]. This is in part because the purses of the average race are closer to an average American middle class salary than a lottery windfall. For example, the average value of the combined purses for all the races held on a given day at Churchill Downs racetrack in Louisville, Ky., in 2008 was $411,000 [source: American Racing Manual]. Not too shabby, but divided among the 10 to 13 races the track holds daily, the purses decrease in value dramatically, especially considering horses don't run in more than one race a day.

Yet on the first Saturday in May, horses entered in a single race that year at Churchill Downs stand to earn $1.2 million for its owners. That race is the Kentucky Derby, which, along with the Preakness Stakes and the Belmont Stakes, is one-third of American Thoroughbred racing's Triple Crown. In the United Kingdom, the English Triple Crown consists the 2000 Guineas Stakes, the Epsom Derby and the St. Leger Stakes. While in both of these Triple Crowns, some races are called derbies, all of them are actually stakes races -- specifically Grade I stakes races, the most prestigious and generally most lucrative horse races. Only an estimated 0.2 percent of the 65 percent of those race-trained yearlings will win a Grade I stakes race [source: Allin].