Life after the Race: Death and Breeding 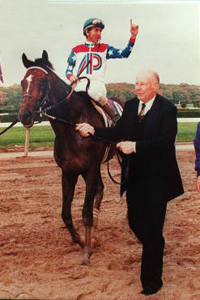 Thoroughbred horse Cigar raced as a 5-year-old and won more prize money than any other horse in history. He is shown here after winning the 1995 Breeders Cup at La Jolla, Calif.
Getty Images

It costs a tremendous amount of money to not only buy, but also maintain a race horse. There are stable fees, the salaries of grooms, trainers and farm managers, transportation costs, food. Keeping race horses can be an expensive business. Horses also have a comparatively short racing life. Most graded races are open only to colts and fillies ages 2 to 3 (Triple Crown races are open only to 3-year-olds), and the average Thoroughbred horse that makes it to post has only 18 starts in his or her lifetime [source: Equinews]. Some of the greatest Thoroughbred racehorses, including Seabiscuit and Man O' War, raced for only two years before retiring. Others, like 16-consecutive race winner Cigar, continued racing as a 5-year-old, but for the most part a horse's racing life will last perhaps three or four years.

This means that an owner has a very limited opportunity to produce a return on investment through racing his Thoroughbred. An owner of a winning horse can continue to make income, however, by collecting stud fees when leasing a stallion out to sire. Owners of Thoroughbred fillies and mares pay fees reaching half a million dollars to owners of winning and well-known stallions to bring their horses to mate, called covering. One breeding syndicate -- investors who make money through stud fees -- paid $60 million for 3-year-old Fusachi after he won the Kentucky Derby to retire him to stud [source: WGBH]. Winning fillies may go on to collect fees or produce valuable foals as broodmares -- the female equivalent of a stud.

Strong objections have been raised against breeding syndicates -- and horse racing in general -- in recent years. Stallions may be forced to inseminate as many as three females a day at six-month stretches for 20 years or more by syndicates that increase profits through the sheer volume of fees collected [source: Animal Aid]. Other Thoroughbreds, including newborn foals of questionable financial worth, are simply discarded. In February 2011, the British paper The Observer reported that in Great Britain alone, 7,933 horses were slaughtered for meat there in 2010; that was a 50 percent increase over the prior year and an estimated 25 percent of that increase in slaughtered horses was thought to be Thoroughbreds [source: Doward].