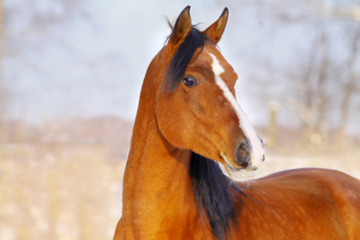 Arabians, like this bay-colored horse, and other members of the Oriental horse group, provided the foundation and quickness of the Thoroughbred breed.
Hemera/Thinkstock

There were more than just the three foundation sires imported to the United Kingdom in the late-17th and early-18th centuries. As many as 200 other stallions from the Oriental group were brought in from the Middle East during that time and they too made large contributions to the Thoroughbred breed [source: Thoroughbred Heritage].

The bloodlines of these early contributors -- horses with names like Old Snap, Coneyskins and Lister Turk -- were lost in the way the Thoroughbred ancestry is traced. Bloodlines are traced through male horses only; a great running horse that produces only daughters may still have a major impact on the abilities of the Thoroughbred breed, but on paper its lineage is broken. Another way for a Thoroughbred's bloodline to become severed from the breed is if it mates with a horse from another breed. Any resulting foal will not be a Thoroughbred.

It takes a literally special horse to be a Thoroughbred. To be officially considered a Thoroughbred, a colt or a filly, must have been foaled (born) to full Thoroughbred parents, the dam (its mother) and the sire (its father). Keeping track of bloodlines may seem simple enough, but keep in mind that more than 100,000 Thoroughbreds are foaled worldwide annually, with more than 27,000 born in North America alone in 2010 [source: Allin, Schmitz].

To keep track of all of these live births as well as the original ancestral bloodlines, Thoroughbred horse racing organizations around the world maintain registries called stud books. In the late-18th century, James Weatherby, whose uncle was an early record keeper for the Jockey Club, took it upon himself to trace the bloodlines of all Thoroughbreds through their sires. He compiled the General Stud Book (GSB), first published in 1791 and maintained by the Weatherby family for the Jockey Club to this day.

The GSB provides the basis for all other stud books; other countries' stud books branch off from the original. Although the first Thoroughbred, a stallion named Bulle Rock, was imported to America in 1730, the American Stud Book's registry begins in 1868 [source: WGBH]. For a time, however, American Thoroughbreds couldn't make it into the General Stud Book. Records were lost during the Civil War, and to prevent the introduction of horses of dubious breeding, the Jockey Club passed the Jersey Act, a 1913 policy that allowed only horses whose parents had both been registered in previous editions to be included in the registry [source: Weatherbys Ltd.] This barred most American horses from the registry; the act was upheld until 1949. Following its repeal, the Jockey Club allowed horses registered in other official stud books into its own.