by Nathan Chandler
Prev NEXT
5

The goblin shark is unusual in many ways; one of those is its pink hue. © 2015 HowStuffWorks, a division of Infospace LLC

If you've ever seen the iconic movie "Aliens," you've been haunted by dreams of toothy, bald creatures bursting from your chest and snapping at your face. Now picture a shark with just such a face swimming around in the darkest, deepest seas. That's the goblin shark, an aptly named monstrosity from your worst nightmares.

Goblin sharks have a protruding snout that looks like a pointy sword. Just below the snout are a set of protruding jaws that appear to be mismatched for the shark's face, as if evolution spun the wheel of ugly and the goblin shark lost in the worst possible way. What's more, these sharks aren't your stereotypical gray color. Instead, their skin has a distinct pink hue.

If you're ever in the water when a goblin shark passes by, you'll find yourself dwarfed in size — they can grow as big as 18 feet (5.5 meters) in length. Fortunately, you're unlikely to encounter such a beast. These sharks typically cruise way down to 3,000 feet (914 meters), and the older they get, the deeper they dive.

As with a lot of deep-sea animals, science knows very little about goblin sharks. No one knows exactly how they reproduce, and a pregnant female has never been captured. So like the goblins of fairy tales, these fish remain a mysterious and fantastic example of just how diverse life on Earth can be. 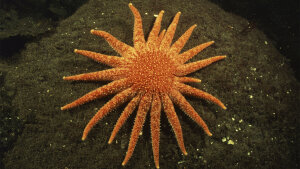 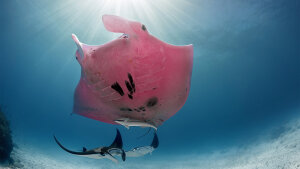