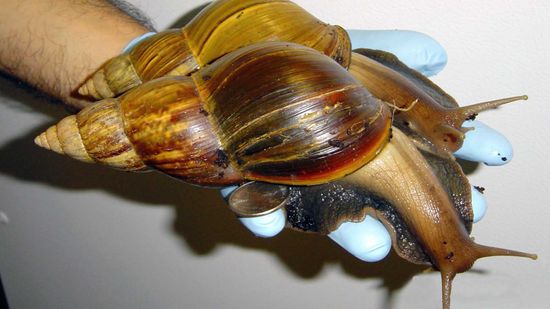 Despite its cartoonish visage, yes, this is a real animal. This recently spotted stubby squid was so charming he inspired poetry.

A Massachusetts fisherman recently caught a blue lobster, which had us wondering how rare this crustacean really is.

Scientists until recently believed Octopuses & Co. were colorblind. If that were the case, how could the animals create such vivid physical color displays?

Baby fish rely on jellyfish to protect them from predators, but that delicate symbiosis is at risk as seawater CO2 levels rise due to human actions.

A Bright Side for Coral Reefs?

Corals reefs have had a rough last few decades, but researchers have discovered a few reefs that are doing better than expected. And they're eager to learn why.

How can a rich ecosystem exist beneath water as muddy as that of the Amazon River's plume? The surprising discovery all has to do with physics and density.

And that price is a tapeworm infection.

The sea butterfly snail moves in Arctic waters in the same way as fruit flies through tropical air. This case of convergent evolution was uncovered by a new study.

Whether they're busting open a child-proof medicine bottle or prying apart Mr. Potato Head, octopuses have some crazy brains. Actually, they have nine of them.

The Mariana Trench is the deepest place on Earth, and we're still in the dark about much of the life that calls it home. Here are just a few of the trench's eye-popping residents.

Beautiful, graceful, majestic: Such highfalutin words might seem befitting of a mermaid, but a manatee? Perhaps our humble friends deserve a bit more credit. After all, they are known to stoke the imagination of a lonely seafarer or two.

Unless you've butchered an octopus, you might assume that it's as red-blooded as you are. And you'd be wrong. Why are octopuses the original blue bloods?

Do you think much about the lobster before you crack it open and dip it in butter? These humble animals have some very odd habits. For one thing, they pee out of their faces.

The death adder is native to Australia, New Guina and nearby islands. This relatively short, stocky snake has a triangular head, tapering tail and long fangs, the longest of any Australian snake.

How do Sea Monkeys work?

A friend of mine gave me a package of Sea Monkeys as a gag gift for my birthday. I grew them, and they look nothing like the package but they really are alive! What are these things?

How to Treat a Jellyfish Sting

Can a dead stingray's sting kill you? It's highly unlikely, but you'd still be in for a world of hurt if you get stung.

When we say someone is as slippery as an eel, it's not a compliment. But maybe eels get a bad wrap. They're slimy, but they have their reasons.

Imagine that someone is pursuing you down a dark alley. Do you run? Duck behind a trash bin? The mimic octopus doesn't sweat this kind of scenario: It just shape-shifts to disguise itself. You'll be surprised by the tricks it's got up its tentacles.

As you observe jellyfish twirl underwater, it's difficult not to be mesmerized by their graceful movements. But if their tentacles touch your skin, you'll regret being anywhere near these gelatinous blobs.

Giant squid are aggressive creatures that prey on almost anything that comes their way. How big do these monsters of the sea get, and could they really take down a watercraft?