by Mark Mancini
Next
An alligator snapping turtle (Macrochelys temminckii) shows off its built-in fishing lure. The Washington Post/Getty Images

Question: What does the biggest freshwater turtle in North America have to do with a household cleaning implement?

The answer comes down to a well-worn bit of folk wisdom. Legend has it that the alligator snapping turtle — a huge reptile capable of weighing 176 pounds (80 kilograms) — can split a wooden broomstick in half with a single bite.

Zoologist Peter Charles Howard Pritchard tested this claim for his 1989 book "The Alligator Snapping Turtle: Biology and Conservation." When he pestered a 165-pound (75-kilogram) specimen with a brand-new broomstick, it grabbed ahold of the wood. The bite went deep, but failed to sever the implement. However, as Pritchard tried to wrest his stick free, the creature finished the job, splitting the handle between its jaws.

Looks like those old folk stories have some basis in truth after all. Alligator snappers deserve our respect; mishandling one could cost you a finger. Still, the turtles aren't normally aggressive around people, preferring to remain aloof when Homo sapiens enters their habitat.

If you live north of the Rio Grande and east of the Rocky Mountains, you've probably seen the alligator snapper's smaller cousin: The common snapping turtle.

By most standards, the common snapper is one big turtle. At anywhere from 9 to 35 pounds (4 to 16 kilograms), this reptile far outweighs most of the sliders and painted turtles that share its native waters. And the thing's shell alone measures up to over 18 inches (46 centimeters) long.

Yet alligator snappers can easily surpass those dimensions. Or at least, the males can.

The alligator snapping turtle (Macrochelys temminckii) is built like a prehistoric armored tank and has a bite to match.
Wikimedia Commons (CC BY-SA 3.0)

You see, the alligator snapping turtle is sexually dimorphic (meaning that there are distinct differences in size or appearance between males and females in addition to the sexual organs themselves), with a considerable size gap dividing the two sexes. Adult females have a top shell length of 18 inches (46 centimeters) or so. The largest males are almost twice that size, sauntering around in colossal 31.5-inch (80-centimeter) shells.

Those titans qualify as some of the biggest freshwater turtles alive today. And here on North American soil, their size is totally unrivaled.

Both common and alligator snappers look downright prehistoric. The turtles have unusually long tails adorned with comb-like rows of projecting tubercles. To boot, the common snapper's got an extremely long and flexible neck. Alligator snapper necks are (proportionately) much shorter, offering a more limited range of motion.

Shell shape is probably the most obvious difference between them. On the upper shell of an alligator snapping turtle, you'll find three prominent ridges; common snappers lack these decorations.

Alligator snappers, like actual alligators, are southern creatures. By and large, the turtles are restricted to bodies of water that drain into the Gulf of Mexico.

Questions have been raised about their distribution. The alligator snapping turtle's scientific name is Macrochelys temminckii. Experts used to assume it was the only member of the Macrochelys genus. That's why most field guides will tell you alligator snappers reside in Louisiana, Arkansas, Mississippi, Alabama, the Florida panhandle, southern Georgia and western Tennessee — plus sections of Texas, Oklahoma, Missouri, Illinois, Kentucky and Kansas.

But the map was recently redrawn. According to a 2014 study in the journal Zootaxa, we've been looking at three separate species all along. The paper's co-authors say the turtles in the western, central and eastern portions of this range are genetically distinct from one another.

If the researchers are correct, the snapper populations in and around the Suwanee and Apalachicola rivers represent two previously unrecognized species — which they named Macrochelys suwanniensis and Macrochelys apalachicolae.

Conservationists are less than enthusiastic about the suggested split. Instead of a single, widely distributed species, we could be dealing with three geographically confined ones. That could really complicate our attempts to protect these turtles.

Unlike most semiaquatic turtles, these guys almost never leave the water. True, females lay their eggs on dry land, but that's about it. Alligator snappers do most of their basking beneath the water's surface, eschewing the logs and dry rock piles where other reptiles soak up sunlight.

The creatures have an affinity for deep rivers, but they're equally at home in swamps, ponds, lakes, bayous and canals. The turtles are most active at night, when they tend to forage for food. Menu options include rotting corpses, water plants, fruits, seeds and all sorts of live prey items. Frogs, snakes, snails, salamanders, leeches, crustaceans and other small animals often fall victim to Macrochelys. So do other turtles, for that matter.

And why stop there? Alligator snappers have also been known to eat wood ducks, muskrats, beavers and young crocodilians. Good grief.

When push comes to shove, though, fish are their dietary cornerstone. Instead of chasing them down, the turtles make like Ron Swanson and use lures.

Affixed to the alligator snapper's tongue is a blood-filled appendage that's pink in color and shaped like a worm. By wriggling this — and keeping the rest of its body absolutely still — the reptile draws fish into its open maw. An alligator snapping turtle can hold its breath for 50 minutes straight, giving it plenty of time to wait for some curious critter to swim within striking distance.

Hatchling and juvenile Macrochelys are beset by many predators, from racoons to river otters. Yet humans are apparently the only species adults have to fear. If it stays out of danger, an alligator snapper can live to be several decades old; one captive specimen was at least 70 years, four months and 26 days of age when it died.

Sometimes, adult alligator snappers have algae-covered backsides. When the material grows on their shells, heads and limbs, it helps the turtles blend into muddy river bottoms, rendering them all but invisible to fish. 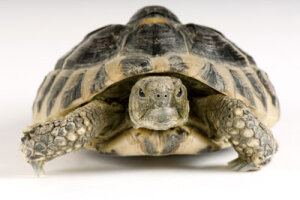 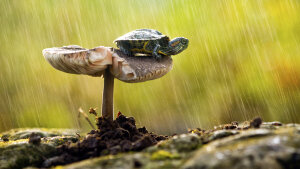