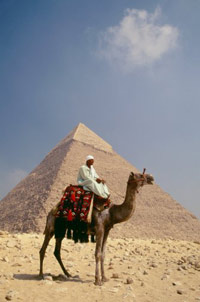 The camel replaced the wheel as the primary means of transportation for a long time in certain areas of the world.
Pankaj Shah/ Gulfimages Collection/Getty Images

Before the invention of the steam engine, the automobile, and the airplane, there was the horse-drawn carriage. And although this may seem primitive in comparison to modern transportation, keep in mind that animals allowed for some of the greatest advancements of civilization for millennia through migration and trade. Here are some of the most significant animals that allowed for human transportation:

Although livestock and transportation animals provided much-needed labor and helped humans forge civilization, we shouldn't forget about little guys. Next, we'll learn how certain rodents, insects and other animals offered their own contributions through domestication.