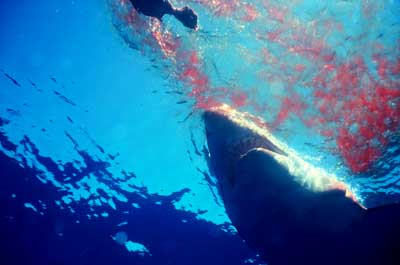 Let's say you're camping in the woods and wake up to find a bear at your campsite. Unless the bear acts aggressively, dropping to your knees and playing dead can cause it to lose interest in you and amble on.

What if a similar situation happened in the ocean? While doggy paddling around, you spy a shark nearby. Do you go limp and hope for the best? To answer that question, let's examine how sharks approach and attack humans.

Unlike popular beliefs about sharks as vicious man-eaters, the infamous fish usually make contact with humans out of curiosity rather than predation [source: Parker]. For instance, if you're thrashing around in the water or have reflective clothing or jewelry on, a shark may mistake you for a fellow fish or seal. Fueled by this inquisitiveness, sharks often perform hit-and-runs, which means they take a bite -- rarely lethal -- and swim away [source: Florida Museum of Natural History]. This happens particularly in shallower depths.

The real danger comes with sneak attacks and bump-and-bites. You won't have any warning signs for a shark sneak attack, hence the name [source: Florida Museum of Natural History]. With bump-and-bites, which often occur in deeper waters, sharks circle and run into you before going in for a bite.

When you notice a shark heading your way, it's in your best interest not to play dead. Instead, get those arms and legs pumping and try to swim away as quickly and quietly as you can before it takes a nibble.

If you're alone in the water, playing dead isn't going to help because sharks prefer to go for more defenseless prey to conserve energy. If one bites, it's time to fight. Hit a shark in the nose, eyes and gills to stun it and scare it away. Since blood will attract more sharks, find dry land as a fast as possible to reduce the chance of repeat attacks.

In one specific survival situation, playing dead is your only viable option. We'll talk about that on the next page.