Something's wrong in the bat cave. No, not Batman and Robin's lair -- we're talking actual bat caves full of thousands of bats. You see, when winter rolls around, bats join the bears, chipmunks and other furry mammals and tuck in tight for hibernation. Hibernation conserves energy during the season when food is scarce and the weather is harsh. The birds of the night take their winter sleep in caves called hibernaculums.

In the winter of 2006 in Albany, N.Y., something strange happened to hibernating bats during what should have been a dormant period. A wildlife biologist noticed that some bats were awake and flying outside of their hibernaculums during the day when they were supposed to be deep in slumber [source: USGS]. He also noticed a ring of white fungus around their noses, as though they had taken a whiff of flour. By early 2007, as many as 11,000 bats in New York caves had died [source: Metzner]. The ones examined by wildlife specialists appeared emaciated, with little to no fat left on their bodies and scarring on their wings.

Scientists have compared this bizarre bat plague to Colony Collapse Disorder, which has mysteriously wiped out thousands of honeybees [source: Bat Conservation International]. Bees affected by the disorder shared similar odd behavior with the bats, flying outside of their hives during cold weather and appearing physically altered when they died.

­This crisis may not concern those who only associate bats with Dracula and haunted houses, but bats are actually more friend than foe to people. Don't like mosquito bites? Score a point for bats since these flying mammals devour up to 600 mosquitoes in one hour [source: Swartz Lab]. Around 70 percent of bats around the world exclusively eat insects, although some tropical species eat fruit and others eat small animals, like frogs and rodents [source: Swartz Lab]. Because of these dietary habits, a drop in the bat population would negatively impact people, especially farmers who benefit from the natural pest control bats perform.

So have bats fared any better since that bitter winter of 2006, and what is that telltale white substance streaked across their faces? Fly on to the next page to find out. 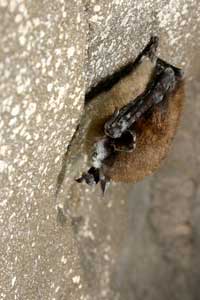 How Billie the Dolphin Taught Her Flippered Friends to Bust a Move
Orangutan Jungle School: Teaching Orangutans How to Be Orangutans
Spider Monkeys Are the Trapeze Artists of the Treetops