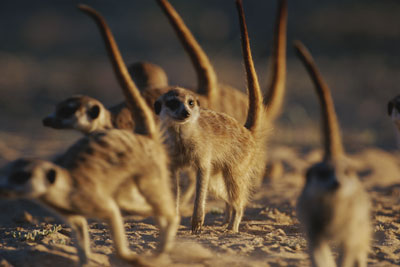 The meerkats shown here may be gearing up to mob a dangerous predator.
Mattias Klum/National Geographic/Getty Images

Shouldn't the meerkat that just ate the venomous scorpion be dead? It's perfectly fine. In fact, it looks a little lethargic after such a big snack. How can this be? Meerkats have developed a technique to deal with scorpion venom. What's more, meerkats may be able to handle a bite from some types of venomous snakes.

Biologists have substantiated that meerkats are immune to some snakes' venom because they share ancestry with the mongoose family. In some parts of the world, such as India, people prize mongooses as house guards because they can wage battle with deadly snakes, like cobras. This trait may have been passed along on the African plains after mongooses evolved into meerkats. Meerkat immunity to snake venom remains an uncertainty, however. When a snake threatens a meerkat group they gang up on it -- a method called mobbing [source: Animal Planet]. When meerkats mob, they form a circle around the predator, raise their tails and move about in a formation that looks like a single, large animal [source: Roberts].

Usually, mobbing is enough to scare off even a deadly snake. But not always. Meerkats have been observed being bitten by venomous snakes. While some have survived the attacks, others have died. So biologists aren't entirely certain if meerkats are completely immune to snake venom.

You may have heard that meerkats are immune to scorpion venom. This is a bit misleading. If stung by a particularly deadly species of scorpion -- like a cape scorpion or granulated scorpion -- a meerkat may still die [source: Kalahari Meerkat Project]. However, meerkats have developed a technique for handling the venom found in scorpions they commonly eat.

When a meerkat spies a scorpion, it moves in quickly for the kill. The scorpion may be aware the meerkat is close by, but the meerkat seizes it so fast that the arachnid can't respond. First, the meerkat zeroes in on the tail, biting off the scorpion's stinger and discarding it. Without its tail, the scorpion is unable to introduce venom into a meerkat's bloodstream. Although the clawlike pincers at the end of each of a scorpion's arm may look deadly, they're actually for grabbing and holding -- no venom is distributed through them.

With its stinger removed, the scorpion's fate is pretty much sealed. But there's still venom on its exoskeleton. To combat this, meerkats have learned to brush off any remaining traces in the sand after removing the stinger [source: Meerkat Info]. With the scorpion quickly prepared, it's mealtime.

Observation of meerkats has shown that adults teach pups how to properly eat a scorpion. This lesson is taught in stages. At first, pups are simply given dead scorpions; later on, they get ones with stingers broken off. Eventually, the pups will be handed a disabled scorpion, stinger and all. Finally, as they approach the age at which they're able to go out on their own, an adult may toss a young meerkat a live scorpion [source: BBC]. It's kind of sink or swim by this time.

Since meerkats ingest scorpions in such a specific way and can die if stung by a scorpion or bitten by a venomous snake, it's not entirely fair to say they're immune to the venom. Still, they've adapted pretty well, considering the circumstances.

For more information on meerkats and related topics, mob the links below.

Check out more on Meerkat Manor.