Why do rhinos charge anything unfamiliar? 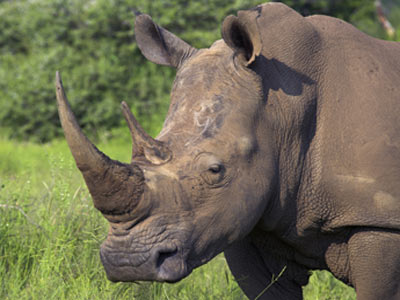 In some parts of the world, rhinoceros horns are sought for their perceived medicinal properties. See more pictures of mammals.
Steve and Ann Toon/Robert Harding World Imagery/Getty Images

You'd think the second largest group of land mammals on Earth would be a pretty confident bunch. But not rhinoceroses: These guys are so defensive that they've earned a reputation as indiscriminate attackers that will charge just about anything in sight.

These giants -- whose name comes from the Greek word rhino, meaning "nose," and ceros, meaning "horn" -- don't run at things out of paranoia, though. While they have few natural predators due to their lethal horns and imposing bulk, humans have driven them nearly to extinction. There are actually five species of rhinoceros -- two in Africa and three in Asia -- and every one of them is endangered. Overall, the world rhino population has declined 90 percent since 1970 [source: African Wildlife Federation].

The reason for the decline is fairly straightforward. Although some rhino populations are threatened by political instability and conflict, the majority of them have been killed because of illegal poaching. It turns out that the same horns rhinos use to fend off predators -- and occasionally each other -- are in high demand, especially in Asia. Among other things, the horns are used in ornamental carvings and are thought to possess a variety of medicinal properties.

The horns aren't actually made of bone, but of keratin, the same protein that comprises your hair and nails. And they grow just about as fast, if not faster. Their horns grow as much as 3 inches (8 centimeters) each year and may reach lengths of up to 5 feet (1.5 meters) long [source: National Geographic].

Three of the rhino species, the Sumatran rhino of Asia and the black rhino and white rhino of Africa, have two horns -- a longer one at the front of their nose and a smaller one behind that. The other Asian rhinos, the Javan and the Indian species, have only one horn.

So despite their heft, which ranges from 750 to 8,000 pounds (340 to 3,629 kilograms), rhinos nevertheless have good reason to feel vulnerable -- and even a little bit angry [source: Defenders of Wildlife]. If someone was constantly hunting your family for the magical properties supposedly found in your nostrils, you'd probably have a chip on your shoulder too.

Thus, simple fear and self-preservation is one possible reason for the unprovoked rhino charges. Another is a bit more obvious -- unless, of course, your vision is as bad as theirs. 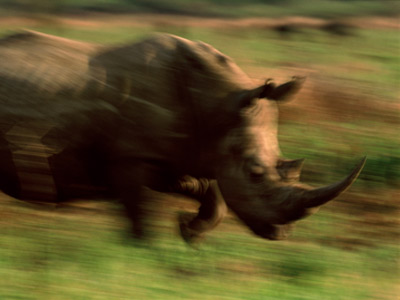 Whether or not all rhinos bear a grudge is up for debate, but most observers seem to agree that a large part of why rhinos charge even inanimate objects is because of their poor vision. The beasts are most certainly nearsighted and can't see very well beyond 90 feet (27 meters) [source: Maydon]. They do, however, have a powerful sense of smell and hearing, so if they detect an unfamiliar scent or hear an odd noise, their tendency is to charge in the general direction of it.

Not all rhinos charge as frequently as others. Black rhinos, which are common in Eastern and Southern Africa, are the most likely of the five rhino species to tackle without provocation. The white rhinoceros tends to be more docile and the Javan and Sumatran species supposedly lack the presumed bad temper altogether.

Although the tamer species have been reported to charge on occasion, those instances may simply be a case of improper navigation. Due to their poor vision, these peace-loving rhinos may actually be trying to escape the supposed threat but, instead, end up running toward it [source: Bruton].

­­­In other instances, the rhinos may not be trying to scare something off or to escape, but simply burning off steam. When they become aggravated or hurt, the animals sometimes take out their frustration on inanimate objects like trees or termite mounds, repeatedly smashing them with their horns until the object disintegrates [source: Skinner].

Whether a rhino is likely to charge also depends a bit on its personal history and individual temperament. If it was raised in a relatively peaceful, non-threatening environment, it will probably be less aggressive. If, however, it has been frequently hunted or otherwise provoked, it will no doubt be easily perturbed. Either way, it's a sure bet that if you come between a female and her calf, you better start moving.

Whether a rhino's charge is coldly premeditated or initiated out of fear and confusion doesn't really matter once its lumbering body gets going. Not only can their horns reach frightening lengths, but the animals are surprisingly fast for their size, able to reach speeds of up to 40 mph (64 kph) [source: National Geographic, San Diego Zoo].

Of course, unless it's a tree or a termite mound, the target has the benefit of full vision capabilities.

Despite a ban on the international trade of rhino products, demand for rhino horns remains high. Along with habitat loss, poaching presents a grave threat to all five rhino populations. Although there's no proof of the horn's medicinal value, it's highly prized as an effective treatment for everything from nosebleeds to strokes. A survey of medical practitioners in Asia revealed that 60 percent of them stock rhino horn and 27 percent believe it's essential for their work [source: World Wildlife Fund].

Are monkeys superstitious?
Why do gorillas build new nests every night?
How Billie the Dolphin Taught Her Flippered Friends to Bust a Move