What Color Is a Zebra? 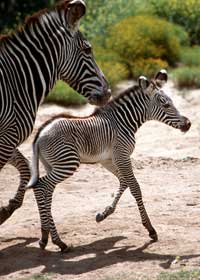 Genetics determine the variety of stripes in zebras. While the specific processing of determining this striping pattern isn't known, it has something to do with selective pigmentation. Melanocyte skin cells produce the pigments that color the fur. Certain chemical messengers regulate which melanocytes deliver their pigment to the zebra [source: Camazine]. Mathematical models haven't been able to accurately simulate the development of the pattern, but we do know that it takes place during the embryonic phase [source: The Development of Zebra Striping Pattern].

Speaking of stripes, that brings us to the age-old question: What color is a zebra? If you research this answer, you'll quickly discover many conflicting perspectives. But Lisa Smith, Curator of Large Mammals at Zoo Atlanta, reports that the coat is "often described as black with white stripes." This makes sense since the pattern is a result of pigment activation (black) and inhibition (white). That means black is the actual color of the fur, and the white patches are simply the areas that lack pigmentation [source: Camazine]. To top it off, most zebras have dark skin beneath their fur [source: Smith].

Although zebras share similar stripe patterns and the same general appearance, a closer examination of their coats reveals distinct differences among the three existing species:

To learn more about the secrets of zebra's stripes and other animals, visit the links below.

The extinct quagga, a subspecies of the plains zebra, lived in South Africa and was originally thought to be its own separate species because of its unique coloring. This equine looked like a cross between a horse and a zebra since its head and neck was striped and faded into a solid coat toward its rump. The last quagga died in a zoo in 1883 [source: The International Museum of the Horse]. Scientists have retrieved DNA from preserved quagga pelts, and efforts are underway to revive the subspecies in South Africa [source: The International Museum of the Horse].