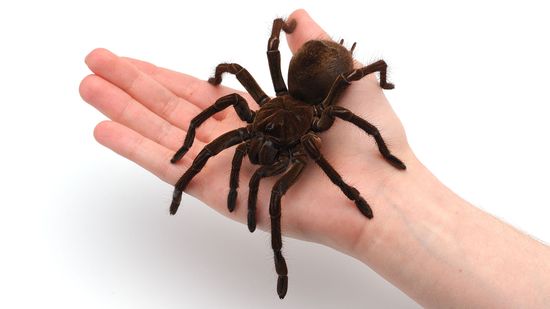 Spiders don't have wings, so technically can't fly. But some arachnids can soar through the air with the greatest of ease.

Leucistic squirrels are rare, but Brevard, North Carolina has a thriving population.

Most of us think all bees live in colonies, or hives, but there are far more species that don't produce honey, don't sting and live mostly solitary lives underground.

Audubon's 'Lights Out' Program Kills the Lights to Save the Birds

Migrating birds are dying by the billions as they lose their way and smash into lit buildings at night. Big cities like Philadelphia are turning out the lights to try and help save them.

Fruit Bats Are the Best Pollinators (and Suppliers of Tequila)

You read that right. Fruit bats are instrumental in pollinating hundreds of plants, including the agave, a key ingredient in tequila.

The Long-eared, Hopping Jerboa Is the Desert's Cutest Resident

With a little pig snout and the locomotion of a kangaroo, these tiny desert rodents hardly ever drink water and rarely urinate.

Humpback Whales Have Made an Amazing Comeback From Extinction

Humpback whales can be as long as a city bus and weigh as much as two. They love to breach and water slap with their fins and tails, making them a perennial favorite for whale watchers.

The pistol shrimp is feared in the ocean for its ability to hit a prey with air bubbles that travel 82 feet per second, pop at 218 decibels and deliver 8,000 degrees Fahrenheit of heat.

GPS Could Help Tigers and Traffic Coexist in Asia

Tiger deaths and injuries from vehicle collisions are still rare but they're increasing. Conservationists want to use GPS collars to track the tigers and understand how transportation infrastructure affects their biology and ecology.

Why Do Gorillas Beat Their Chests?

It's a behavior synonymous with gorillas — beating the chest. But why do they do it? Researchers think they've figured out what the purpose is behind that pounding.

The Black-browed Babbler, Once Thought Extinct, Is Back

A bird thought to be extinct for 170 years is rediscovered in Borneo.

Why You Should Love the Much-maligned Magpie

Magpies are much-maligned as harbingers of doom, thieves of shiny objects and songbird eggs, but they're smart, monogamous for life and actually hold funerals for one another.

Finches can live for five to 10 years and make great companion pets as long as they are given enough space to fly around.

Often confused with the venomous coral snake, which advertises its toxicity through bright bands of color, the milk snake is harmless to humans.

Billions of Brood X Cicadas Are About to Get Loud

And we mean really loud. Like up to 100 decibels loud. Get all the buzz on what's making these bug-eyed bugs return.

Muskrats Are Fat Little Rodents With a Signature Smell

They look a lot like beavers and the two rodents have a lot in common. But muskrats are their own species with their own signature scent.

Can You Dig It? If You're a Badger, You Can

Badgers love to dig — one den, or "sett," in southern England is thought to cover a territory of over a square mile and have up to 100 entrances.

The cartoon Roadrunner beep-beeped his way through the desert, outfoxing Wile E. Coyote every time, but the real bird can run up to 27 mph and, in some Native American traditions, offers protection from evil spirits.

The American Red Squirrel Is Small, Territorial and Aggressive

Red squirrels have a big attitude, which might have to due with their small size. They have to act big. And they do so with noisy and aggressive behavior.

When threatened, the slow loris licks venom secreted from a gland under its arm. Licked and loaded, the loris is ready to poison an attacker with a bite.

Langurs Are Primates That Love to Monkey Around

There are over 60 species of langur in the world, all of which eat a plant-based diet and most of which burp a lot.

Why Is Suet Used in Birdfeed?

Suet is a fat long used in British cooking. But in the U.S., this high-calorie, nutritious item is favored as bird food. Here's why.

Why You Should Totally Dig Prairie Dogs

These chunky little guys aren't dogs at all. They're actually part of the rodent family, and they're shockingly smart.

The showy lionfish is a stunning beauty. But this invasive species, which was released into the wild in the 1980s, is wreaking havoc on delicate reef ecosystems worldwide.