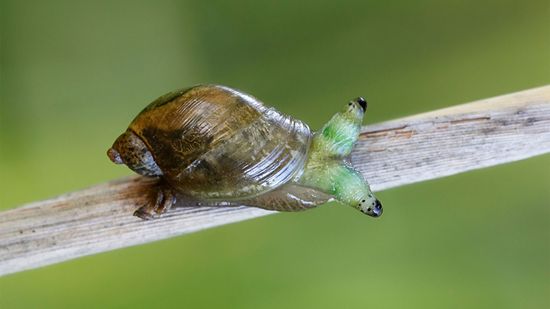 The showy lionfish is a stunning beauty. But this invasive species, which was released into the wild in the 1980s, is wreaking havoc on delicate reef ecosystems worldwide.

Pit Vipers Can 'See' You, Even in the Dark

Pit vipers also carry venom in twin glands behind their eyes, delivered through movable fangs that can be folded up against the roof of their mouth.

Dik-dik: The Tiny Antelope With the Embarrassing Name

The name dik-dik comes from the repetitive 'dik' sound the tiny female dik-dik makes when she feels threatened.

These two amphibians look similar and are often confused for each other. So how many traits do they share?

The Lemon Shark Is a (Relatively) Friendly Shark

The lemon shark isn't as aggressive as some other sharks and it isn't quite as yellow as its name suggests.

The Serval Stands Tall and Jumps Like A Champion

Servals have long legs and necks, which allow them to spot prey over the tall grasses of the savanna, but their huge ears give them their best weapon — an acute sense of hearing.

Vampire bats do it and so should we: socially distance when ill, that is. That's what a new study found.

9 Enormous Facts About Sperm Whales, Gigantic Creatures of the Sea

Sperm whales are one of the largest creatures in the ocean. And they have the biggest brain on the planet. So are they also the smartest? We'll tell you.

These snakes are some of the best reptilian actors you'll ever meet, but don't let the act fool you.

A Greenland Shark Living Today Could Have Been Alive in 1620

This denizen of the frigid deep not only lives a crazy long life, it also can grow up to 24 feet in length and eating its flesh can make humans "shark drunk."

The praying mantis is a powerful predator, and not as robotic (or as romantic!) as it seems.

The Blue-footed Booby Dance Gets the Girl Every Time

The blue-footed booby is known as much for its comical mating dance as for its intensely colored blue feet.

The Caracal's Got Super Jumping Game and Satellite Dish Ears

Caracals have really cool ears and can also jump 10 feet in the air from a seated position.

What's the Difference Between a Brown Bear and a Black Bear?

Yes, the obvious fur color seems like a dead giveaway, but you can't always judge a bear by the color of its fur.

Are Mules, Burros and Jackasses All Donkeys?

Are these strong and dependable animals all the same? If so, why the different names? If not, what makes them different?

6 Facts About the Majestic Snowy Owl

From the fictional Hedwig in the Harry Potter series, to those that live wild and free, the snowy owl is one of the most captivating species of owl in the world.

Are Dingoes Dangerous (and Did One Really Eat a Baby)?

These wily canines are probably best known because of the phrase "a dingo ate my baby." But come on. Did a dingo really eat a baby? And do they even attack humans?

Why Does the Kookaburra Laugh?

There's more to Australia's kookaburra than the cheery song you learned as a kid, but what is it that makes the kookaburra laugh?

To some, the thought of snakes flying through the air is the scariest thought imaginable, but, as we'll explain, flying snakes don't actually fly, they "fall with style."

Macaws mate for life, can speak human words and have even been known to blush when delighted.

What's the Difference Between a Dugong and a Manatee?

Their mamas may be the only ones who can tell them apart, but there are major differences between these cousins, one being the type of water in which they can survive.

Despite their name, rat snakes don't eat just rodents. This huge family of snakes, which lives on every continent except Antarctica, also eats lizards and amphibians.

The Echidna Is One of the World's Strangest Mammals

From the four-headed male reproductive organ to hosting the world's largest flea and sporting a body covered in spiny hairs, this cute little creature takes the cake for mammalian weirdness.

Most species of the rarely seen anglerfish live up to a mile beneath the ocean, where the females lure prey with a head-dangling hook appendage and permanently fuse with male suitors. It doesn't get much stranger than that.