Browse the article How Chiggers Work 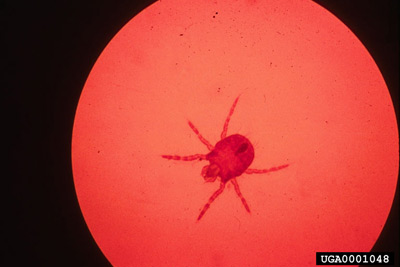 If chiggers thrive where you live, your family lore is probably full of rules for how to avoid the tiny, biting bugs. Be careful where you sit -- stay off the ground, rock walls, decaying wood benches and fallen logs, especially if you're wearing shorts. Also, be careful where you walk. Stay out of tall weeds and patches of brambles, and never pick wild berries without wearing long sleeves and gloves. You may have even heard warnings about specific hiking trails, parts of the yard or patches of vegetation. Venturing into them will leave you covered in chigger bites, but you'll be unharmed if you steer clear.

If you've been unlucky enough to experience chigger bites, you've probably heard a long list of home remedies for them. Friends and relatives might suggest everything from covering the bites in clear nail polish to slathering yourself in turpentine. Unfortunately, few of these remedies actually work, and some of them, like bathing in solvents, are dangerous.

But all the worrying about avoiding chigger bites and the desperate attempts to cure them are understandable. Chigger bites itch intensely, and they can take weeks to go away. Since chiggers go for the thinnest skin on our bodies, the bites tend to cluster in places that are already delicate and sensitive. On top of that, it's rare to get just one chigger bite -- chiggers seem to travel in groups.

The bites often have a red or white spot in the center. Along with the long-lasting discomfort, these spots often lead people to believe that chiggers are physically imbedded in their skin. This idea that chiggers burrow into people's skin may be the most common misperception about them.

In this article, we'll look at exactly what chiggers are, how they feed and why they cause so much aggravation and discomfort in their human victims. We'll also explore how to find out if there are chiggers in your lawn and how to keep from being bitten.

Many people think of chiggers as blood-sucking insects, like fleas, ticks or mosquitoes. There are two problems with this belief. The first is that chiggers are not insects, and the second is that they don't eat blood. Chiggers are the larvae of harvest mites, and they consume the cells of their host's skin.

Harvest mites are arachnids -- they're related to ticks and spiders. Adults are small and red, and they have eight legs. They live in the soil, so people often find them while digging in yards or gardens. Adult harvest mites eat other insects and their eggs. They can be beneficial to human beings, since they often eat the eggs of other pests, such as mosquitoes.

Harvest mite larvae are another story. Like their adult forms, larvae are red, but they have six legs instead of eight. They are parasites that have to eat the tissues of living animals to survive. They're usually too small for a person to see, although you may be able to see groups of them on your skin.

The larvae hatch from spherical eggs that adult females lay on the ground. Harvest mites tend to lay all their eggs in one spot, which is one reason why infestations can be extremely localized. One patch of weeds might be full of newly hatched chiggers while a nearby patch has none.

After having one complete meal, harvest mite larvae drop to the ground and molt into nymphs. Like adults, these nymphs aren't parasites. Instead, they eat insect eggs. The nymphs mature into adults, and the cycle begins again with a new set of eggs.

There are thousands of species of harvest mites living all over the world, with different species native to different regions. Some of the species that tend to be a nuisance to humans include Trombicula alfreddugesi, Neotrombicula autumnalis and Leptotrombidium deliense. Leptotrombidium deliense is common in parts of Asia, and it can carry scrub typhus, a bacterial disease that's fatal if untreated, but which can be cured with antibiotics. Chiggers in other parts of the world are not known to transmit diseases to humans.

Regardless of their species, most chiggers use the same method to acquire food. Next, we'll look at how chiggers find their victims. Then, we'll explore how they eat.

The Chigger's Quest for Food 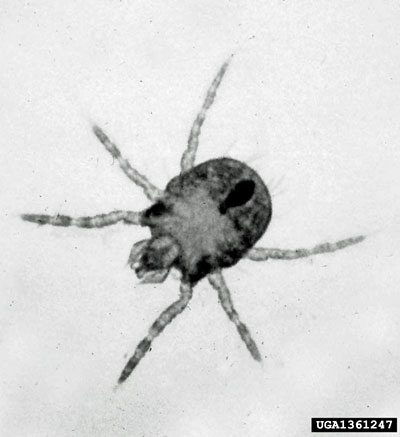 Chigger larvae can hatch in the spring, summer or early fall. Newly hatched chiggers have one goal -- to find a meal. They are parasitic, and their meal has to come from the skin of a host. A chigger's host can be just about any vertebrate animal, and the meal takes up to four days to complete.

Finding a food supply that will allow it to eat for four days may seem like an insurmountable task for a nearly microscopic, larval life form. But chiggers have several instinctive behaviors that help them find food:

These behaviors all help chiggers find hosts, but finding a host is only half the problem. Chiggers also have to find places to feed where they won't be brushed or groomed away. On top of that, the skin in the feeding area has to be thin, because a chigger's microscopic mouthparts can't get through tough, leathery skin. Chiggers often attach themselves to pores or hair follicles or any other natural depression in the skin.

Women and children are more prone to chigger bites than men are because men generally have thicker skin. This is also why people often get chigger bites behind their knees, in their armpits and in other areas where the skin is soft and delicate. Waistbands and other parts of clothing can protect feeding chiggers, which is why people often find clusters of bites there.

Chiggers can crawl over a host's body for hours before settling down to eat. Next, we'll look at what happens when they do.

Scientists have found chiggers on snakes, turtles, birds and a wide variety of animals, but people aren't their preferred hosts. Many of the animals chiggers feed on don't react to their bites, so there's no risk of being brushed or scratched off before its meal is over. This is important because a chigger that doesn't finish a meal doesn't usually start another one. Instead, it dies before molting, which is usually what happens when a chigger bites a person. People usually start to itch within a few hours and often scratch the feeding chiggers away. A hot shower with plenty of soap will also kill chiggers, so hygiene practices in most of the world are likely to remove and kill chiggers before they finish eating.

Like ticks, fleas and mosquitoes, chiggers have specialized mouthparts that help them retrieve food from their hosts. A chigger uses two specialized mouthparts called chelicerae to make a hole in its host's skin. It then injects some of its saliva into the wound. The saliva contains digestive enzymes that break down cell walls. The partially digested cells and their contents become a slurry that the chigger ingests.

Unlike many other parasitic bugs, chiggers don't have needlelike, piercing mouthparts. Instead, they use an interesting accomplice -- the host's own skin. The same salivary secretions that break down cells also cause the surrounding tissue to harden. This creates a strawlike tube called a stylostome. The longer the chigger feeds, the longer the stylostome becomes, and the deeper it penetrates into the skin.

The intense itching that chigger bites cause comes from two sources. One is an allergic reaction to the chiggers' saliva. In some people, this reaction is extreme, leading to large sores or hives. In most, it simply causes a small, red, itchy bump. The other source of itching is the stylostome itself. It causes irritation and discomfort until the body's immune and lymphatic systems dissolve it and carry it away. If the chigger fed for a long time and the stylostome extends deep into the skin, this process can take quite a while.

Many home remedies for chigger bites, like painting the bite with nail polish, involve the idea of smothering an embedded chigger. But by the time you notice the bite, you've often brushed or scratched away the chigger already. The reason nail polish makes some people's bites feel better is that it seals the bite from air. Over-the-counter creams that relieve itching often do a better job of making the bites feel better. It's also a good idea to apply an antiseptic, especially if you've scratched the bite extensively -- too much scratching can lead to a secondary infection. If you're bitten, don't be tempted to try home remedies involving toxic substances, and don't try to remove the stylostome -- either could cause secondary infections or other injuries.

In a lot of ways, preventing chigger bites is easier than treating them. We'll look at how to keep chiggers off your skin in the next section.

Although chiggers don't burrow under people's skin, there are parasites that do. One is the scabies mite. One species of scabies mite causes scabies in humans. Another causes mange in pets. Another burrower is the chigoe flea, also known as the jigger flea. The chigoe lives in sandy soil in tropical climates. The female chigoe burrows into the skin of her host and lays her eggs there. The word "chigger" is probably a corruption of "chigoe" or "jigger," although the pests are not related. 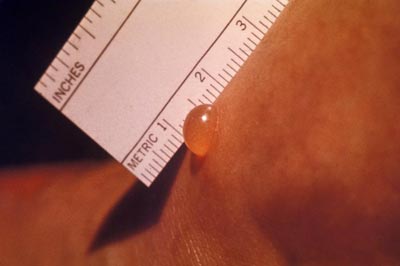 Chiggers are almost invisible to the naked eye, so it may seem like there's not much you can do to keep from being bitten. But several simple steps can make it a lot less likely that you'll become a chigger host:

You can also try to reduce the number of chiggers on your property. Sometimes, the only way people know they have an infestation is the appearance of fresh chigger bites. However, you can look for chiggers on your property using a 6-inch (15-centimeter) square piece of black paper or cardboard. Place the paper or cardboard on its edge in an area that you suspect contains chiggers. Any chiggers that are there will follow their instincts and climb to the top edge of the paper. Since chigger infestations tend to be localized, it's a good idea to repeat this test at multiple locations on your property and use an insecticide only on areas that are infested. Be sure to shower and wash your clothes afterward.

You can also reduce the number of chiggers in your yard by cleaning up potential chigger habitats. These include overgrown weeds, decaying wood and other vegetative debris. Keeping your lawn neatly mown will also help keep the chigger population down.