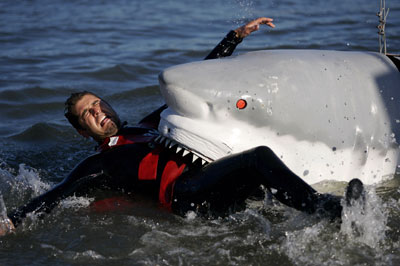 As it turns out, the image of a shark biting through anything in its path is largely unfounded. Shark bites aren't quite as strong as we might imagine.

For many years, the strength of shark bites was largely anecdotal and qualitative. Based on reports of attacks from predators like the bull, great white and tiger sharks, we know that many species produce enough force to bite through the human body. But no hard numbers were associated with such evidence. The first test to quantify the pressure exerted by a shark bite was conducted in 1965 by two researchers who created a gauge consisting of a solid aluminum tube wrapped in PVC, with ball bearings inserted around the outside of the contraption [source: Martin].

The researchers wrapped the device in mackerel and gave it to lemon, tiger and dusky sharks to chew on. After calculating how deep the sharks pushed the ball bearings into the tube when they latched on with their jaws, scientists could estimate how much force was packed into each chomp. They concluded that dusky sharks had the strongest bite -- these sharks exerted about 27 pounds of force [source: Martin].

Since different species have adapted to eating various types of food, the strength of their bites should logically be different. Some sharks, like the whale shark (the largest shark species), have thousands of teeth, but no longer use them. Instead, whale sharks have developed a tissue that filters plankton and small fish right into their stomachs. Other sharks, like the horn shark, are adapted for durophagy -- eating hard-shelled animals alive by crushing and breaking their shells with their teeth and jaw strength.

This doesn't seem like much, since a 1995 study found that the mean bite force for 22 common breeds of dogs was under 58 pounds [source: Lindner, et al]. But what about the big guys, like tiger, bull and great white sharks? It's really their teeth that do the most damage. Most shark researchers conclude that this is why the number of deaths from great white shark attacks is so disproportionately low compared to the number of attacks. Researchers at the University of New South Wales studying great whites' bite strength believe this species' ability to inflict carnage is based on its incredibly sharp and abundant teeth, rather than the strength of its jaws [source: Live Science].

Interestingly, for all of their destructive force, sharks' teeth are easily lost. Sharks don't have any bone in their bodies (their supportive structures are made of cartilage), so their teeth aren't anchored to their jaws as well as humans' teeth are. While shark teeth can break off easily, sharks have the ability to reg­row them. Lemon sharks can replace a lost tooth in about eight days [source: Sea World]. This is yet another reason that sharks hold onto their reputation as the most fearsome predators on Earth -- even if they can't bite as hard as we thought.

For more information on sharks and other related topics, visit the next page.