Anatomy of a Giraffe 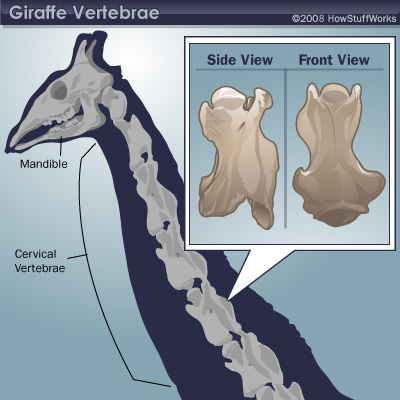 Certain characteristics of giraffe necks give them a flexibility rivaling any Slinky. The first feature is the way that the vertebrae in the neck, called the cervical vertebrae, are joined together. Remember that giraffes have seven of these bones, just like we do. However, giraffe cervical vertebrae are bound together with ball-and-socket joints [source: Owen]. These are the kinds of joints that link your arm with your shoulder and offer a 360-degree range of motion. Also, the joint between its neck and skull permits the giraffe to extend its head almost completely perpendicular to the ground.

Moving down to where the neck meets the back, we find the second important anatomical feature for the giraffe's slinkiness. We call the vertebrae in the top portion of our backs the thoracic vertebrae. In humans, thoracic vertebrae are joined at the middle of the bone to provide added stability; and our cervical vertebrae fuse at the front and back for more mobility. Giraffe anatomy doesn't follow this same construction, and its first and second thoracic vertebrae are bound in the same way that its cervical ones are, with ball-and-socket joints [source: Dagg and Foster]. That adaptation gives the giraffe an extra point of flexibility. It also accounts for the giraffe's signature hump [source: Encarta].

This highly flexible, yet heavy, body part is integral to the gangly animal's movement. Watch a giraffe and you'll notice that the neck moves back and forth with its stride. That's because the weight and motion of the neck guides the giraffe's center of gravity [source: Dagg and Foster]. The animal also tosses its neck to and fro to help it rise to a standing position on its spindly legs. You can compare this to when we swing our arms up over our head to pull us out of bed in the morning.

As another result of the long neck, a giraffe's blood has a long journey to travel. For that reason, the anatomy of a giraffe is quite amazing. The animal has a specialized cardiovascular system that keeps blood moving adequately to the brain and heart when it moves its neck and head around, ensuring that bending down to take a sip of water won't cause a possibly lethal head rush [source: Dagg and Foster]. Giraffes' blood vessels are equipped with valves that prevent blood from backtracking due to gravity [source: Wood and Johansen]. They also have a higher concentration of red blood cells, larger hearts and tighter skin, especially around their legs, which help circulate blood better [source: Dagg and Foster].

Keeping everything chugging along, the giraffe also breathes at a relatively slow rate. Its enlarged lungs compensate for the trachea's extensive length, as the air travels up that long highway of a neck.