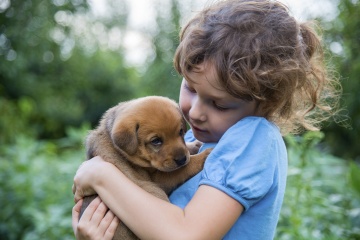 Dogs really do advance and age faster than humans, but not quite at the same rate at all times. Some years the rate is much slower than others for our furry friends.
VolNa69/Thinkstock

In one of a string of well-known '80s Alpo commercials, actor Lorne Greene proclaimed, "Danny is 14 -- that's like 98 to you and me." The national commercial helped to perpetuate the myth that a single calendar year equates to seven dog years, but also did poor Danny a disservice, inflating his age by a decade or more. While this seven-year myth helps dog lovers understand canine life stages compared to those of humans, experts agree that it's not entirely accurate, particularly once dogs reach their golden years.

Though it's possible to translate dog years to human years, the process isn't as simple as using a straight multiplier. That's because a dog's progression through life is not exactly linear, and can vary significantly based on the breed and size of the animal. For example, canines experience rapid development in their first year, aging as much as 20 times as fast as humans, and then gradually slowing their development until the ratio is more like 5-to-1 [source: Bialik].

If you need a framework for estimating Fido's age, assume he reaches the age of 15 by the end of his first year, putting him at the stage where he's ready to reproduce. Add another nine years for his second year of life, which puts his age at 24 by the time he reaches his second birthday. After that, add four to six years to his age for every human year – this is where size comes into play. For small dogs, assume they age about four years for every human year. For medium dogs, this figure ranges from four to five, while large dogs age five to six years annually [source: Westwood Hills Veterinary Hospital].

While this may not seem like much of a difference, it can really add up over time. By the age of five, large breeds hit the age of 36 and are considered seniors. Medium dogs have another year, reaching geriatric status by age six, while small dogs can hold off on the senior title until they reach the age of seven -- or 44 in dog years [source: Westwood Hills Veterinary Hospital].

And Danny, from the Alpo commercials? After 14 long years of life, the medium-to-large Danny is somewhere between 78 and 88 years of age, or 10 to 20 years below Lorne's estimate.