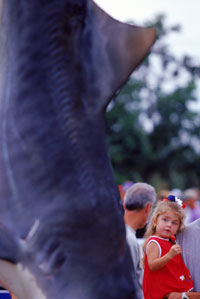 A young girl, who will never set foot in the ocean after this day, eyeballs a 400-pound bull shark.
David McLain/Getty Images

Picture the scene: It's a breezy, sunny day and you're wading in the cool, shallow waters of the Mississippi River. You're somewhere inland -- way inland. Like Missouri. You look upstream and a 7-foot bull shark swims your way with, what looks like to you, a smile on his face. While not highly likely, it can, and has happened. Bull sharks are one of only two species of shark that can survive in freshwater.

Bulls can actually survive in just about any kind of water, from freshwater rivers and lakes to the saltiest of water bodies like St. Lucia Estuary in South Africa. After Hurricane Katrina swept through New Orleans, La., large numbers of bulls were seen swimming inland in Lake Pontchartrain. In 1955, there was a report of a bull-shark sighting all the way up the Mississippi River near Chicago, Ill., in Lake Michigan.

Bulls make their way into freshwaters to keep their newborn pups safe from harm. They don't mate or actually give birth in freshwater -- they do this in nearby tidal creeks that have a mix of salinity. The freshwater lakes and rivers provide safety for their pups, which would be hunted by larger predators in the ocean. Freshwater also provides a nice food buffet for mom, dad and the kids. The bull shark is king during its freshwater exploits, so pretty much everything is on the menu.

Bulls have a physiological feature that separates them from other sharks and allows them to process freshwater and saltwater by manipulating the amount of sodium and urea that their bodies need. Urea is the waste produced by the body when proteins are metabolized. When bull sharks reduce the amount of salt and urea in their bodies, they are able to adapt to various levels of salinity in water bodies.

How do they accomplish this? By peeing a lot -- roughly 20 times as much as when they're in the ocean. When bulls swim into freshwaters, they need to achieve a balance of saltwater to freshwater that still allows them to function normally. They're able to reduce the concentration of salt and urea in their blood by increasing their urine production, which is expelled in a much more diluted concentration than it normally would be. However, this overworks the kidneys of the bull shark, forcing it to travel back and forth between the ocean and inland waters.

The most notable place where this happens is in Lake Nicaragua, the largest lake in Central America. Lake Nicaragua connects to the Caribbean Sea by way of the San Juan River. The bull shark makes its way up the San Juan, sometimes leaping from the water like salmon, through eight different sets of rapids to find a temporary home in the lake. In the late 1960s, researchers from the University of Nebraska tagged more than 2,000 bull sharks in the lake to study their traveling habits. What they found was pretty remarkable. Roughly 10 percent of the tagged sharks were spotted in the ocean and then back in the lake. This means that the bulls routinely make the 118-mile (189 km) journey up the San Juan -- a trip they complete in a speedy seven to 11 days.

In the next section, we'll tell you about the bull shark's feeding habits.