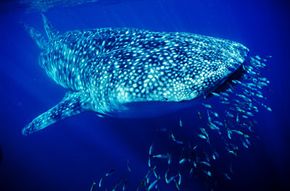 Sharks come in all sizes, from the juniors department all the way to the plus-size rack. The dwarf lantern shark averages a mere 5 inches, but sharks only get bigger from there. The pygmy shark is only a few inches bigger than the dwarf lantern shark. The spiny dogfish shark checks in at about 4 feet (1.2 meters) followed by the angel shark at 5 feet (1.5 meters) and the white tip reef shark at 7 feet (2.1 meters). Between 10 to 20 feet (3 to 6 meters) long is where you'll find most sharks -- lemon sharks, hammerheads, nurses and makos, to name a few. Over 20 feet, things get a little scary. Tiger sharks, great hammerheads and great white sharks can all grow to more than 20 plus (6 meters).

But even at its 20 foot (6 meters) maximum size, the great white shark has nothing on the whale shark. It's believed that these behemoths can grow to a jaw-dropping 60-plus feet long (18 meters) -- that's about 20 feet (6 meters) longer than a school bus. Not all whale sharks grow that large. They average 20 to 25 feet (6 to 7.6 meters) but sightings of whale sharks between 40 and 50 feet (12 to 18 meters) are common. Not only is the whale shark the largest shark, it's also the largest fish in the entire ocean.

Andrew Smith was the first ichthyologist, or fish expert, to describe and name the whale shark back in 1828. Its scientific name is Rhincodon typus. Depending on what country you're in, you'll hear it called everything from a tiburon ballena (Spain) to a rekin wielorybi (Poland.) Its size makes the whale shark pretty hard to miss.

While it's frequently seen, there's still a great deal about the whale shark that we don't know. For one thing, because of its size, it's nearly impossible to capture and move to a tank for study. There are only two places in the world with tanks large enough to house a whale shark.

Get ready to learn everything you ever wanted to know about this gentle giant. 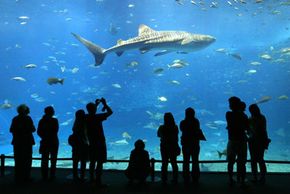 Tourists look at a whale shark through an acrylic panoramic window at the Okinawa Churaumi Aquarium in Okinawa, Japan.
Koichi Kamoshida/Getty Images

The whale shark lives in warm ocean waters throughout the world, except for the Mediterranean Sea. In the Atlantic Ocean, its territory ranges from the northeastern coast of the United States all the way to central Brazil, across to Senegal in Africa and down to the Gulf of Guinea near Cameroon. The shark is found throughout the Indian Ocean. In the Pacific, you can find whale sharks only from Japan to Australia in the East and California to Chile in the West. Researchers believe that the whale shark migrates at various times of the year, but there isn't any solid evidence to back this up yet. While it tends to be a solo swimmer, it has been spotted schooling with its brothers and sisters when food is abundant.

If you saw a whale shark, you probably wouldn't confuse it with any other fish, simply because of its size. Aside from being the largest fish in the ocean, there are a few other physical features that might help you identify a whale shark. Its head is broad and flattened. Unlike most sharks, the whale shark's mouth is nearly at the tip of its nose instead of underneath the snout. Inside its mouth are several hundred rows of tiny, hook-shaped teeth that have been likened to a wood rasp. Although it has a mouthful of teeth, the whale shark doesn't usually use them for eating.

Another unique trait of the whale shark is the distinctive pattern of light-colored spots and stripes on its back. Its back is bluish grey to brown with thousands of cream colored spots scattered in a pattern believed to be unique to each shark, like a human's fingerprint. Researchers aren't sure exactly why the whale shark has the spots. Some bottom dwellers have unusual markings on their backs to act as camouflage from predators swimming above them. The whale shark is neither a bottom dweller nor worried about predators. However, it's related to the carpet shark, which boasts a similar spot pattern for protection. Another theory suggests that these spots help shield the surface-loving shark from harmful ultraviolet sun rays.

Since research on these big fish is scarce, we aren't sure exactly how long whale sharks live. But sharks are notoriously long-living fish, and the whale shark's size indicates it may live up to 100 years.

Until 1995, researchers knew little about the reproductive cycle of the whale shark. Many experts thought that the large shark was oviparous, meaning that it laid eggs on the ocean floor. But in 1995, a large female whale shark was captured and observed. Scientists found that she was pregnant with 300 shark pups, ranging in size from 16 to 24 inches long (42 to 63 centimeters). This meant that the whale shark gives birth to live pups, making it ovoviviparous.

Let's find out how this big beast satisfies its appetite. 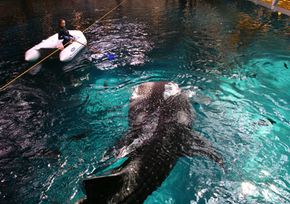 A large female whale shark swims back for a second helping.
HSW 2008

We know whale sharks are long. Common sense will tell you that they're also heavy. There aren't scales large enough to weigh these beasts, but researchers estimate that larger whale sharks can weigh up to 60 tons (54,400 kilograms). It's hard to believe that a fish can grow this large without eating other large fish. But the whale shark feeds mostly on microscopic and small prey. Its favorite meal is plankton -- the tiny plants and animals that drift throughout the ocean. Occasionally, the whale shark will feed on some small crustaceans, squid and larger plants, but its diet is largely built on some of the smallest ocean creatures.

So how does a 50-foot fish survive by eating microscopic plankton? By eating a lot of it! The trick to getting enough of the small stuff lies in a feature unique to the whale shark. Most filter feeders rely on moving slowly through the water, moving their heads back and forth, to let plankton flow into their mouth and through the gills. The whale shark is more like a vacuum cleaner -- it actually sucks the water into its mouth. This allows it to pull in a lot more plankton than other filter feeders.

Once the whale shark draws in a big gulp of plankton-rich ocean water, it closes its mouth and expels the water through a set of large gills. The gills act like strainers, filtering out the water while keeping solid organisms smaller than about 2 centimeters in diameter. Researchers believe that when larger bits of ocean life get stuck in its gills, the whale shark coughs to clear these filters.

With eyes that are set far back on its head, the whale shark doesn't rely much on vision to find the most plentiful feeding ground. Researchers believe that it uses its sense of smell to locate the most protein-rich waters -- its nostrils are conveniently located near the top of its wide mouth. These creatures like to feed in the evenings near the ocean surface where krill and shrimp are abundant.

Swim ahead to the next page to learn about more about the whale shark and eco-tourism. 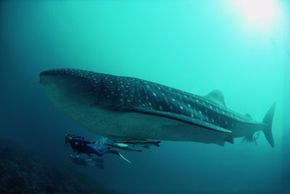 People love the whale shark. Perhaps it has something to do with the fact that it's the largest fish in the ocean. Or, maybe that's because it's such a gentle creature. Despite its size, the whale shark is harmless to humans. Employees at the Georgia Aquarium acknowledge that the whale sharks are among the most popular fish on display.

With all of the adoration that humans heap on this huge fish, it's no surprise that we get up close and personal -- literally. Scuba diving and snorkeling with whale sharks has become a popular new trend in the eco-tourism and adventure travel sector. One whale shark hotspot is the Ningaloo Reef, located off the west coast of Australia. Another is Donsol, Philippines, a small fishing town 375 miles (604 kilometers) from Manila. Every year during feeding season, more and more tourists flock to these destinations to swim with the largest fish in the sea.

From January to June each year, whale sharks migrate to Donsol to feed in the plankton-rich waters. In 1997, tourists got wind of the influx of whale sharks and began swimming with them. Word-of-mouth popularity put Donsol on the map. In 1998, roughly 900 tourists visited during the whale shark season. By 2005, that number grew to more than 7,500. But growth like this in such a small town sometimes causes problems. The bridge leading to the staging area for boats trips can accommodate just one car at a time -- not good when you have 7,500 eager divers on your hands. There are now five small inns on what was once an empty beach, but these modest hotels don't come close to accommodating everyone.

To keep the rising tourist market in check, the town government has reduced the number of boats permitted to be in the water at one time from 50 to 25. But all is well in Donsol -- the town also benefits from the tourism boom. In addition to 1,000 new seasonal jobs, there's talk of building a larger hotel, a concrete road to the launch point and even a small airport.

Get lots more information about sharks and other sea life by exploring the links on the next page.