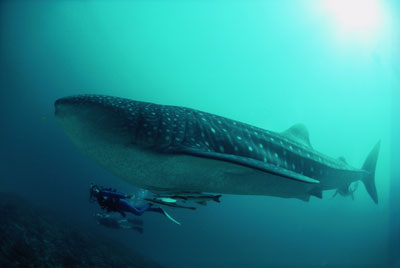 People love the whale shark. Perhaps it has something to do with the fact that it's the largest fish in the ocean. Or, maybe that's because it's such a gentle creature. Despite its size, the whale shark is harmless to humans. Employees at the Georgia Aquarium acknowledge that the whale sharks are among the most popular fish on display.

With all of the adoration that humans heap on this huge fish, it's no surprise that we get up close and personal -- literally. Scuba diving and snorkeling with whale sharks has become a popular new trend in the eco-tourism and adventure travel sector. One whale shark hotspot is the Ningaloo Reef, located off the west coast of Australia. Another is Donsol, Philippines, a small fishing town 375 miles (604 kilometers) from Manila. Every year during feeding season, more and more tourists flock to these destinations to swim with the largest fish in the sea.

From January to June each year, whale sharks migrate to Donsol to feed in the plankton-rich waters. In 1997, tourists got wind of the influx of whale sharks and began swimming with them. Word-of-mouth popularity put Donsol on the map. In 1998, roughly 900 tourists visited during the whale shark season. By 2005, that number grew to more than 7,500. But growth like this in such a small town sometimes causes problems. The bridge leading to the staging area for boats trips can accommodate just one car at a time -- not good when you have 7,500 eager divers on your hands. There are now five small inns on what was once an empty beach, but these modest hotels don't come close to accommodating everyone.

To keep the rising tourist market in check, the town government has reduced the number of boats permitted to be in the water at one time from 50 to 25. But all is well in Donsol -- the town also benefits from the tourism boom. In addition to 1,000 new seasonal jobs, there's talk of building a larger hotel, a concrete road to the launch point and even a small airport.

Get lots more information about sharks and other sea life by exploring the links below.