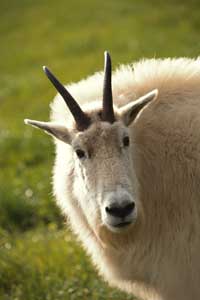 ­What constitutes a true goat? In order to be considered a true goat, an animal must be a member of the genus Capra. That group includes species of domesticated goat, wild goats and ibexes (European mountain-dwelling goats). North American mountain goats, however, are the sole species of the genus Oreamnos. Yet the translation of the Latin genus name doesn't give us much of a hint regarding the difference between mountain goats and true goats. Oreamnos literally means "mountain lamb," which also misinforms since the goats aren't a sheep species, either.

If you look up the definition of mountain goat, you'll usually find the word "goatlike" in the text. Other descriptions refer to them as genetic crosses between true goats and antelopes, or goat-antelopes. However, molecular studies also have linked mountain goats to musk oxen [source: Festa-Bianchet and Cote]. Most likely, mountain goats share a common ancestor with true goats and sheep [source: Chadwick].

Anatomically, goats and mountain goats aren't terribly different from each other. In fact, you have to dig fairly deep to discover the primary distinction between the two animals. For mountain goats and true goats, it boils down to bone. First, mountain goats have thinner, lighter skulls than true goats [source: Chadwick]. Also, their horns, which are made from keratin protein, are a different shape. Curving slightly back toward their heads, mountain goat horns grow shorter, slenderer and pointier than those of true goats. Male mountain goats benefit from the relatively smaller horns. In spring when the males go into rut (or enter mating season), they don't fight as aggressively to win the females. For that reason, larger horns would be unnecessary, although mountain goats can still inflict some damage to competing goats with their horns.

They share­ those skeletal characteristics with a ­tribe, or group, of bovine species called rupicaprids. Rupicaprids are a subset of the animal family Caprinae, which includes oxen, sheep and true goats. Mountain goats are the only rupicaprids in North America. Their predecessors crossed over the Beringia land bridge from Asia 40,000 years ago [source: Festa-Bianchet and Cote]. Five species comprise the tribe: goral, serow, Japanese serow, chamois and mountain goat. Each looks quite different from one another, except for the signature horns, described above.

The mountain goat's name isn't entirely off the mark -- especially when to compared to that of the sea horse. Scientifically, it doesn't pass the accuracy test. But at least it's all in the family.

How to Determine a Mountain Goat's Age

What do a tree and a mountain goat have in common? You can count rings to determine their ages. Mountain goats' horns are comprised of a series of keratin sheaths. Each winter, except their first year, goats form an additional ring around their horns. For mountain goats in particular, which can be challenging to study because of their habitat, their horn rings provide an easy way for researchers to tell how old they are. ­